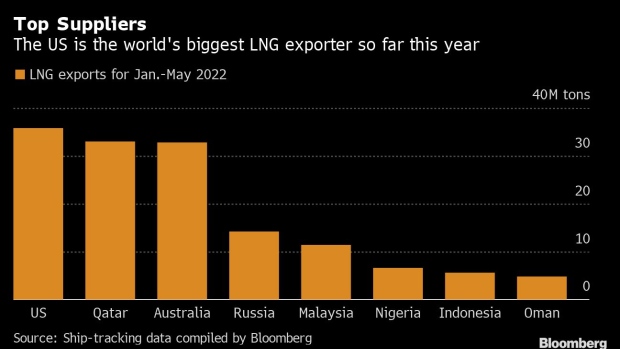 (Bloomberg) -- Asian liquefied natural gas buyers are ratcheting up competition with Europe to secure spare supply as a series of outages threatens a shortage this winter.

A new timeline presented on Tuesday to restart a key US liquefied natural gas export plant was much longer than traders had anticipated, while lower deliveries from Indonesia to Russia tightened global supply. Asian LNG futures for winter delivery surged to the highest level in over two months.

Global gas supplies were already slated to be tight this winter, when demand for the heating fuel peaks, but the new disruptions have set the stage for a fight between Asia and Europe over a dwindling amount of supply. Spot prices in the two regions are trading at a seasonal high due to a global supply crunch exacerbated by Russia’s invasion of Ukraine, and rates could rally to new heights if buyers become entangled in bidding wars.

The Freeport liquefied natural gas export facility in Texas said Tuesday that it may take 90 days to bring the plant partially back online, far longer than an earlier projection of a minimum three weeks. Full capacity isn’t expected to be available until late 2022, which surprised LNG traders who were estimating an outage of two to three months. The facility was shut last week after a fire.

While the Freeport outage is expected to have a larger impact on Europe this summer, where most supply was slated to be delivered, the prolonged disruption will likely leave some Asian customers short this winter. Already, Asian LNG traders based in Singapore are calling suppliers to check available shipments through the rest of the year.

And even tighter supplies could make it harder for Japan -- the world’s second-largest LNG importer -- to secure prompt cargoes from the spot market for the summer, as the country is already facing a power supply crunch.

The extended disruption is seen removing dozens of LNG cargoes from the market, which will require replacing, traders said. Importers in Asia and Europe will try to find alternative supply from other US projects, as well as from exporters including Nigeria, Qatar, Angola and the UAE. Still, there is little available supply through the next few months.

Utilities in Japan and South Korea may dive into the spot market since they were counting on fuel from Freeport to restock for winter, traders said. Japan’s Jera Co. and Osaka Gas Co. have large purchase agreements with the Freeport plant, and they often resell that volume to smaller utilities in the country.

Meanwhile, equipment key for the functioning of the Nord Stream gas pipeline has been stuck abroad by western sanctions on Russia, signaling deliveries to Europe may be curbed for some time. That will likely increase demand for LNG as a replacement.

The looming supply crunch risks pushing up electricity bills and inflation, and could see poorer nations miss out entirely.

The Freeport plant, which represented roughly 4% of global LNG exports last month, supplies gas to BP Plc and TotalEnergies SE in Europe, and SK E&S Co. in South Korea, as well as Japan’s Jera and Osaka Gas. The facility made up nearly a fifth of US LNG output in May.