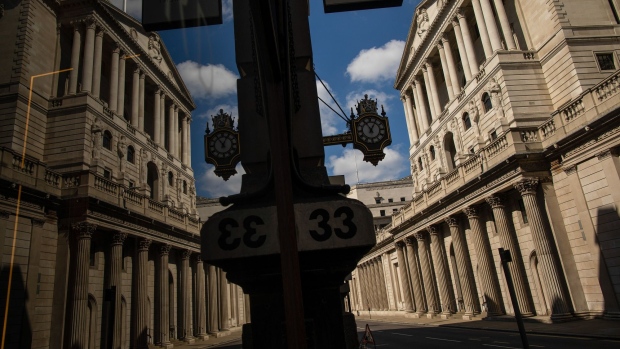 A window reflects the Bank of England (BOE) in the City of London, U.K., on Wednesday, May 6, 2020. Bank of England policy makers will meet this week knowing that they'll probably have to do more to combat the U.K.’s economic slump, if not now then soon. Photographer: Simon Dawson/Bloomberg , Bloomberg

The Bank of England repeated that lenders should plan for the possibility that the U.K. won’t reach a deal with the European Union before the Brexit transition period is complete at the end of this year.

In a rare public statement on the talks, the central bank said Wednesday that a no-deal Brexit was “one of a number of outcomes that U.K. banks need to prepare for.” That followed a report that Governor Andrew Bailey held a conference call where he told banks to step up preparations for such an outcome.

A transition period that has largely preserved the pre-Brexit status quo finishes at the end of this year unless British and EU officials agree to an extension. However, any such request must be lodged by the British before the end of June, and Prime Minister Boris Johnson’s government has shown no sign of doing so, despite the coronavirus crisis disrupting trade talks.

Bailey has been hosting weekly calls with the banks, and executives from Barclays Plc, HSBC Holdings Plc, Lloyds Banking Group Plc and Royal Bank of Scotland Group Plc were on Tuesday’s call, according to a person familiar with the matter, asking not to be named discussing private information. The call was first reported by Sky News.

“It is fundamental to the Bank of England’s remit that it prepares the U.K. financial system for all risks that it might face,” the central bank said. “In performing that role, the Governor meets the leadership of U.K. banks on a very regular basis.”

Failure to reach a trade deal by the end of the year would likely “hurt confidence, spending and investment” and mean a slower recovery for the U.K. than other major European economies, Berenberg economists Kallum Pickering and Holger Schmieding wrote in a note.“In a worst-case scenario, a disorderly exit could tip the U.K. back into recession in early 2021,” they said.

Banks with major operations in the U.K. have already made extensive preparations for Brexit, including establishing new units within EU member states to allow them to continue conducting business. Spokespeople for HSBC were not immediately available to comment, while RBS, Lloyds and Barclays declined to comment.

“But whatever the outcome of the negotiations we will be leaving the single market and the customs union at the end of the year,” he said. “Businesses therefore need to prepare for life after Dec. 31 and many have done so already.”

--With assistance from Stefania Spezzati, Alaa Shahine and Thomas Penny.