This is no one's ideal shopping experience: Mastermind Toys CEO on holiday restrictions

One of the biggest consumer hits of the pandemic, alongside Netflix and the Nintendo Switch, is a 61-year-old doll once mocked as outdated and sexist.

Long written off by many parents and kids -- and criticized for promoting an unrealistic body image -- Mattel Inc.’s Barbie generated its best sales growth in two decades in 2020. Years of planning and a bit of luck have turned the baby boomer of toys into a go-to item for millions of kids.

The result: Barbie and Mattel have turned a corner, with Wall Street projecting years of growth for the toymaker. And the company’s shares are up more than 50 per cent in the past year.

Barbie still carries plenty of baggage for promoting a largely White, gendered image of beauty. But her reputation is changing. In October, a YouTube video of a digital Barbie and friend discussing racial justice went viral and was held up as an example of inclusion. Management will discuss its plans for Barbie and the company in a meeting Wednesday with investors and analysts. 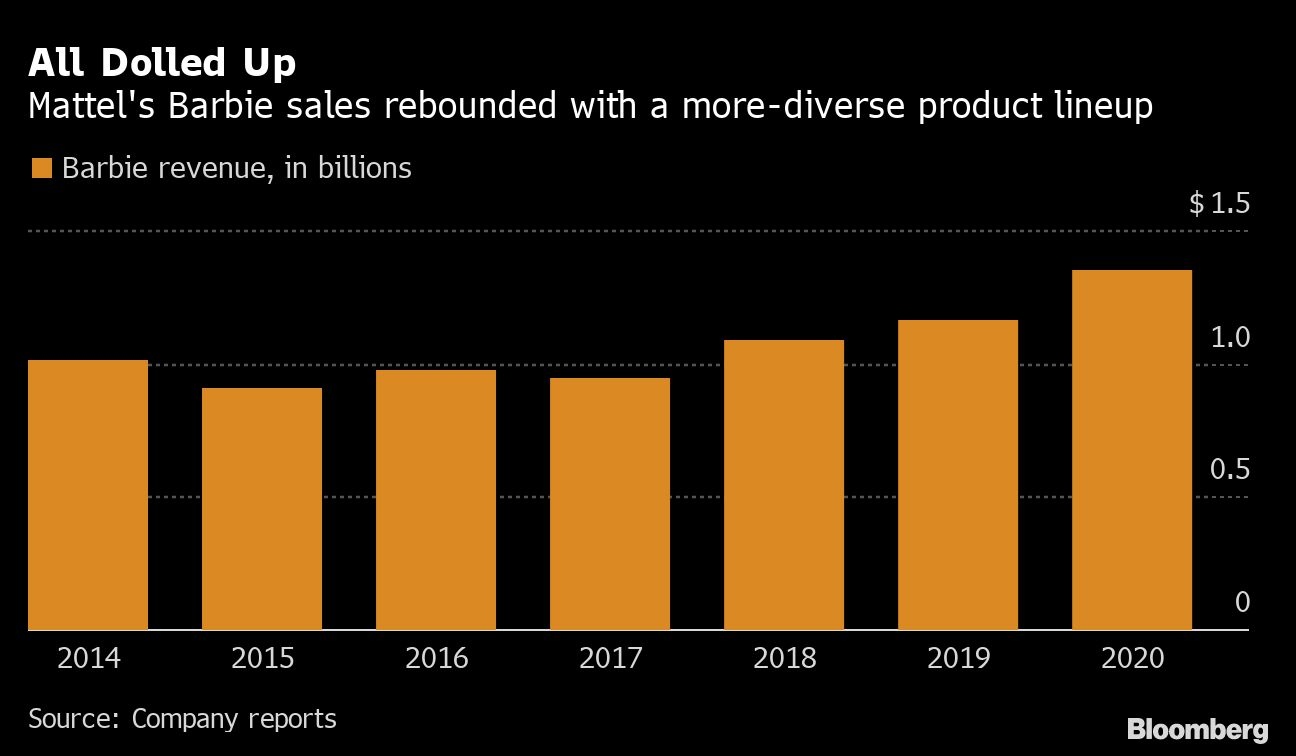 In an interview, Chief Executive Officer Ynon Kreiz gave some of the credit to Walt Disney Co., which ironically dumped Mattel as a doll licensee a few years ago and awarded the business to Hasbro Inc.

“The preeminent company, and a great reference, is Disney,” Kreiz said. “And more specifically, what they’ve done with Marvel. This is the long-term vision.”

Like many companies, Disney and Mattel have revamped their products to reflect the times -- emphasizing racial equality and diversity. For Marvel, that’s meant new types of superheroes and stories. For Barbie: more dolls for people of color and more realistic body types. The coronavirus didn’t hurt either. Families on the hunt for ways to distract their bored children turned to streaming, video games and classic toys like dolls.

Just a few years ago, Barbie’s future was in doubt. Sales were declining and the company, which had long dominated the U.S. doll market, was losing ground to competitors. Kids didn’t view the toymaker’s flagship product as an aspirational role model, and Mattel President Richard Dickson knew it.

“They thought that she was vapid, not really representing what was culture,” Dickson said in an interview. “She didn’t aesthetically look like the world that we live in. And the results, frankly, were quite shocking and depressing.”

The transformation, which the company plans to highlight Wednesday, was no accident. Propelled by Kreiz, who took the reins of the El Segundo, California-based toymaker in April 2018, Mattel dedicated itself to becoming something new. The staid business of incrementally improving a toy each year gave way to the notion that products should rise to the top of conversations around pop culture. And the savvier that Mattel could be at drawing positive attention, the better sales would be.

A film and television veteran who did stints with Fox Kids, Maker Studios and Endemol, Kreiz was used to having a few well-known brands to build on. As CEO of Mattel, he was sitting on a goldmine that hadn’t been fully exploited -- from Uno card games and Fisher-Price toddler toys to American Girl dolls and Hot Wheels cars.

A key part of that transformation happened behind the scenes. Kreiz eliminated much of the company’s manufacturing capacity, formed a film department and enlisted social media influencers.

Since 2018, he has signed agreements with studios, including Warner Bros. and Universal Pictures, to make 11 different feature films based on Mattel brands, even extremely old-school ones like View-Master -- the red stereoscopes that kids use to look at slideshows. Mattel is also active in TV, with more than 17 shows and specials in production, and more than 25 in development.

One feature in development: a Barbie movie with Warner Bros., written and directed by Oscar nominee Greta Gerwig and set to star Margot Robbie.

The COVID-19 pandemic has complicated production, and it’s not clear when any of Mattel’s feature films will actually start shooting. Kreiz isn’t able to provide details, other than to say none will be released in 2021.

Still, Dickson and brand manager Lisa McKnight have laid the groundwork for Barbie to succeed with or without Hollywood. They’ve embarked on perhaps the product’s biggest diversity push since 1980, when Mattel introduced the first Black Barbie.

Barbie’s more inclusive dolls, led by its “Fashionista” brand, now come in 22 skin tones, 94 hair colors, 13 eye colors and five body types. Little girls can get dolls with prosthetic legs or wheelchairs. Ken dolls have a broader array of body types and hairstyles, including man buns. Mattel also rolls out dolls for different occasions: A Maya Angelou that came out just before Black History Month sold out in two days.

Overall Mattel’s best-performing models are the inclusive ones, the company said. No. 1 in 2020 came with a wheelchair.

Barbie’s “look” has long been criticized as unhealthy for young girls. Studies have tried to suss out whether it can lead to depression or eating disorders. In one assessment, researchers said a real women with the old Barbie’s proportions would have room for half a liver, justs a few inches of intestine and be unable to lift her head.

Dickson is hyper-aware that delving into these areas can be risky. Mattel tripped up in 2003, when the company introduced multiracial “Flava” dolls to compete with MGA Entertainment and that company’s popular Bratz for preteens. The line, which included accessories like a graffiti-covered brick wall and a boom box, was assailed for promoting harmful stereotypes. The dolls were discontinued within a year.

Efforts to take Barbie to a wider audience are now more thoughtful, Dickson said. Mattel has a “consumer insight organization” led by Ph.D.s in child development, as well as advisory boards that try to head off missteps before they happen.

“Barbie always performs best when she’s connected to culture,” Dickson said. “And 2020 obviously provided considerable opportunities to do so.”