BMW AG joined peers with strong earnings dampened by warnings of uncertain months ahead because of the global chip shortage roiling vehicle production.

Earnings before interest and tax surged to 5 billion euros (US$5.9 billion) in the second quarter, compared with an average analyst estimate of 4 billion euros. BMW’s operating return from automaking jumped to 16 per cent, roughly double its annual forecast of 7 per cent to 9 per cent.

“The longer the supply bottlenecks last, the more tense the situation is likely to become,” Chief Financial Officer Nicolas Peter said in a statement. “We expect production restrictions to continue in the second half of the year and hence a corresponding impact on sales volumes.”

The manufacturer’s expectations mirror concerns raised by rivals. While Volkswagen AG lifted its operating returns forecast, helped by its luxury Audi and Porsche brands, the carmaker warned of worsening supply woes, and Daimler AG dialed back its delivery expectations due to the shortage. BMW has fared better than others thus far, reporting relatively minor disruptions at its factories.

BMW fell 2.6 per cent in early Frankfurt trading, paring its gain for the year to about 14 per cent.

Whereas BMW hesitated to upgrade its outlook after a strong first half, Stellantis NV raised its full-year profitability forecast substantially on Tuesday. With its Ram truck and Jeep SUV brands, the company is heavily exposed to the U.S. market that’s seen a “breathtaking” rise in vehicle prices.

A year on from the depths of the coronavirus crisis, demand for BMW’s models jumped during the second quarter. After Mercedes outsold its rival by almost 30,500 cars during the first quarter, BMW narrowed the year-to-date gap to just over 4,400 cars at the end of June. 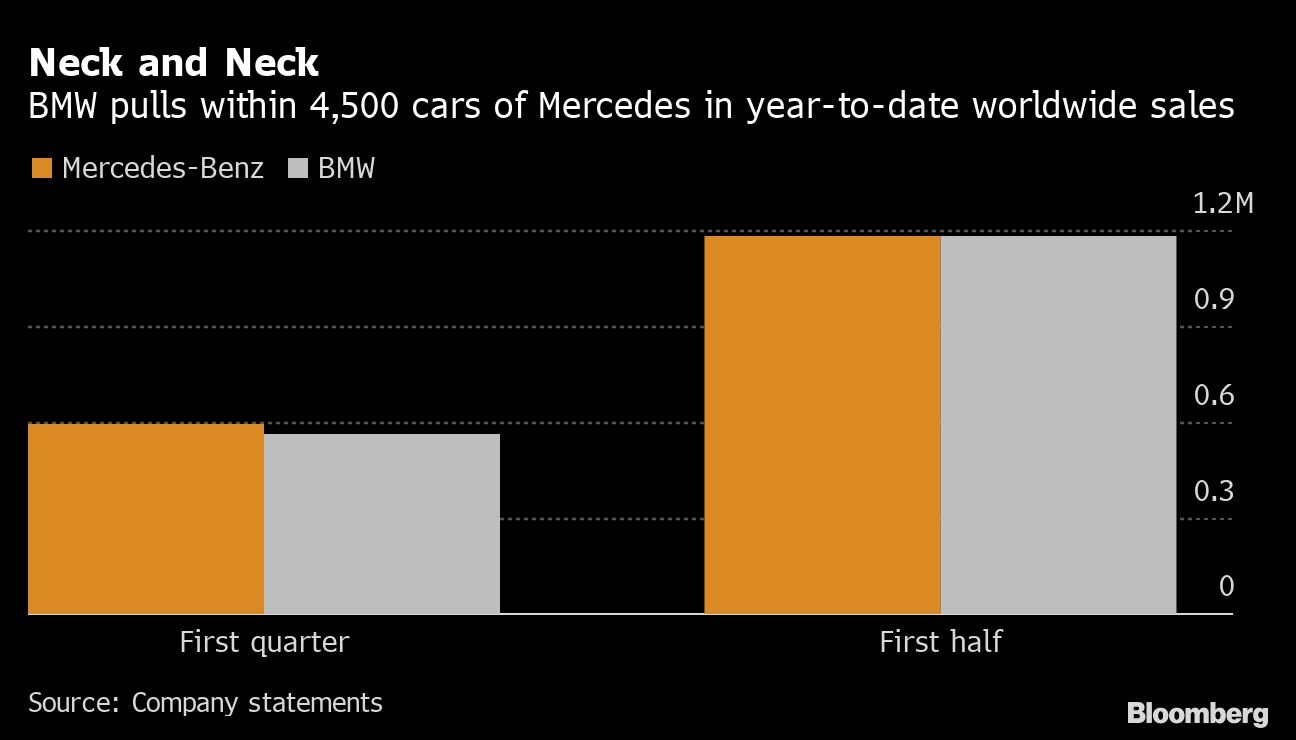 BMW also benefited from charging higher prices and prioritizing its most lucrative models at constrained factories. The dynamic has helped take the sting out of rising raw material costs, though BMW said those increases will drag on earnings during the remainder of the year.

BMW in May said earnings would get a boost of about about 1 billion euros after the Munich-based company cut its provision for a European Union antitrust probe. That change spurred the manufacturer to lift its automaking margin forecast by one percentage point.

The manufacturer previously said it expects a significant increase in earnings compared to 2020 levels and returns from automaking at the upper end of a range between 6 per cent and 8 per cent.

BMW’s strong 2Q headline result was boosted by one-time items, with an underlying adjusted 9.8 per cent auto Ebit margin below consensus compared with Mercedes’ 2Q adjusted margin of 11 per cent and Audi’s of 10.8 per cent. Exceptional items included a known 1 billion-euro provision reversal, but also a new 503 million-euro 1H pension adjustment which undermined the quality of the result. Consensus was already at the top end of Ebit-margin guidance of 7-9 per cent before the pension gain, which implies a weak 2H auto margin of about 6 per cent.