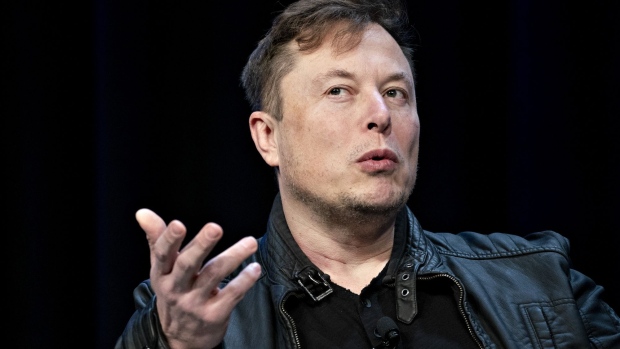 Elon Musk, founder of SpaceX and chief executive officer of Tesla Inc., speaks during a discussion at the Satellite 2020 Conference in Washington, D.C., U.S., on Monday, March 9, 2020. , Photographer: Andrew Harrer/Bloomberg

This sort of (alleged) behavior is surely unacceptable.

Milton attended the commercial shoot. He then obtained raw video footage shot that day. Milton provided the footage to a Nikola digital media employee, whom he instructed to create a short clip of a rolling Nikola One for the purpose of posting the clip on social media. The employee created the clip and showed it to Milton, who directed certain edits to be made. Milton ultimately approved a final version of the clip, which had been sped up two-to-three times. This had the effect of making the Nikola One appear to move faster than it was.

Trevor Milton, founder of electric-truck developer Nikola Corp., finds himself on the wrong end of fraud charges for talking up (or even speeding up) the capabilities of his company and its technology to actual investors. Nikola SPAC’d its way onto the public market a year ago and was valued at US$19 billion at one point. It still commands almost US$5 billion today.

Musk’s rather more successful reality distortion field has occasionally clashed rather too obviously with reality. Probably the most famous example is where he claimed, on Twitter no less, to have “funding secured” for taking Tesla Inc. private at a hefty premium. It was like standing in the middle of Fifth Avenue and pretending you had been given a check to buy Fifth Avenue. The Securities and Exchange Commission sued to ban him from being an officer of a public company but then quickly settled for Musk stepping down as chairman for a few years, paying a fine and the familiar two-step of neither admitting or denying the allegations.

Meanwhile, a judge in Delaware is currently deciding the outcome of a lawsuit against Musk claiming he railroaded Tesla into acquiring another, and obviously struggling, part of his empire, SolarCity Corp., in 2016. To secure shareholder approval for this deal, which had more conflicts than medieval Europe, Musk staged an event on a studio lot in Los Angeles to showcase a new product, the solar roof. These sleek tiles represented the marriage of cutting-edge renewable energy with alluring aesthetics; the nexus of a lifestyle where you awake in your beautifully appointed, planet-friendly home and then whiz off in your emissions-free vehicle.

They also, at that point in time, didn’t actually function. Not that this stopped Musk from telling the assembled onlookers “the houses you see around you are all solar houses” — which, granted, is sort of a meaningless phrase when you sit down and think about it for a minute. On the other hand, if I was at an event centered on a product called the “solar roof,” glass of bubbly and half-eaten crostini in hand, I might take it to mean the faux houses were converting sunlight into usable electricity.

In any case, the US$4.9 billion SolarCity deal was voted through soon after. Tesla’s energy arm, thus fortified, has in the years since made an aggregate gross profit of less than US$600 million. Three years after that LA pitch, Musk told an earnings call the then-forthcoming third version of the solar roof was, he thought, “finally ready for the big time.” Early aspirations of installing thousands per year have given way to oblique updates like this one in the latest quarterly results:

Solar Roof deployments grew substantially both YoY as well as sequentially in Q2.

The other obvious source of dissonance concerns Tesla’s driver-assistance upgrades for its cars, which go by the unassuming names of Autopilot and Full Self Driving. The cars, it should be stressed, are not close to driving themselves, as one of Tesla’s own engineers admitted to California regulators earlier this year.

In early 2019, Musk staged an event touting Tesla’s autonomy chops, dissing those of competitors and asserting there would be a million robotaxi-ready Teslas on the streets in 2020, just a software-update away from earning maybe US$30,000 a year each. Perhaps it was the pandemic, but I’m yet to read about the million-strong armada of “T”-stamped, driverless cabs raking it in for their rentier owners. On the other hand, I did hear this ringing endorsement of Tesla’s new Full Self Driving subscription service from the man himself on this week’s earnings call:

We need to make Full Self Driving work, in order for it to be a compelling value proposition. Otherwise, people are kind of betting on the future. Like right now, does it make sense for somebody to do FSD subscription? I think it's debatable.

Look, we all know there’s no steak without sizzle, especially when it comes to electrified, AI-enabled steak. Startups, by their very nature, push the old envelope and tend to push the bounds of truth along with it. Musk has voiced all sorts of aspirations, targets and schedules over the years, and many of them have not been met. So have executives at many other companies, albeit perhaps with less consistency to their inconsistencies.

On the other hand, Musk has also achieved a lot. Tesla has upended the global automotive industry, with this week’s earnings call from Ford Motor Co. offering the latest demonstration of that. People love their Models S, 3 and the rest of it, even if they aren’t robotaxis and even if a string of new products — the Semi, the Cybertruck, an updated Roadster — remain “in development,” sometimes years after they were supposed to hit the road. Long-time shareholders, meanwhile, have enjoyed huge gains and now own part of a US$670 billion behemoth.

But on the other, other hand, that success is irrelevant when it comes to preserving the figurative rules of the road. The whole point of keeping corporate optimism within reasonable bounds is that it allows for the necessary sizzle without burning investors in general. Saying this or that behavior is OK because a company went on to greater things is like saying “stock price, your honor.”

Many of Musk’s various leaps of faith can be taken as part of the game. Some, like the “funding secured” episode, were just obvious gambles making a mockery of securities law. I can’t say if the SEC effectively blinking on that one created space whereby Nikola’s Milton felt it was OK to (allegedly) indulge his skills as an auteur. I can say it probably didn’t help.