Canadian home sales inched back in November from elevated levels, though prices reached a record as the country’s real estate market continues to benefit from strong demand and low borrowing costs.

National sales declined 1.6 per cent from a month earlier, the Canadian Real Estate Association reported Tuesday. Benchmark prices climbed 1.2 per cent on the month to $650,100, the highest ever. They are up 11.5 per cent over the past 12 months. 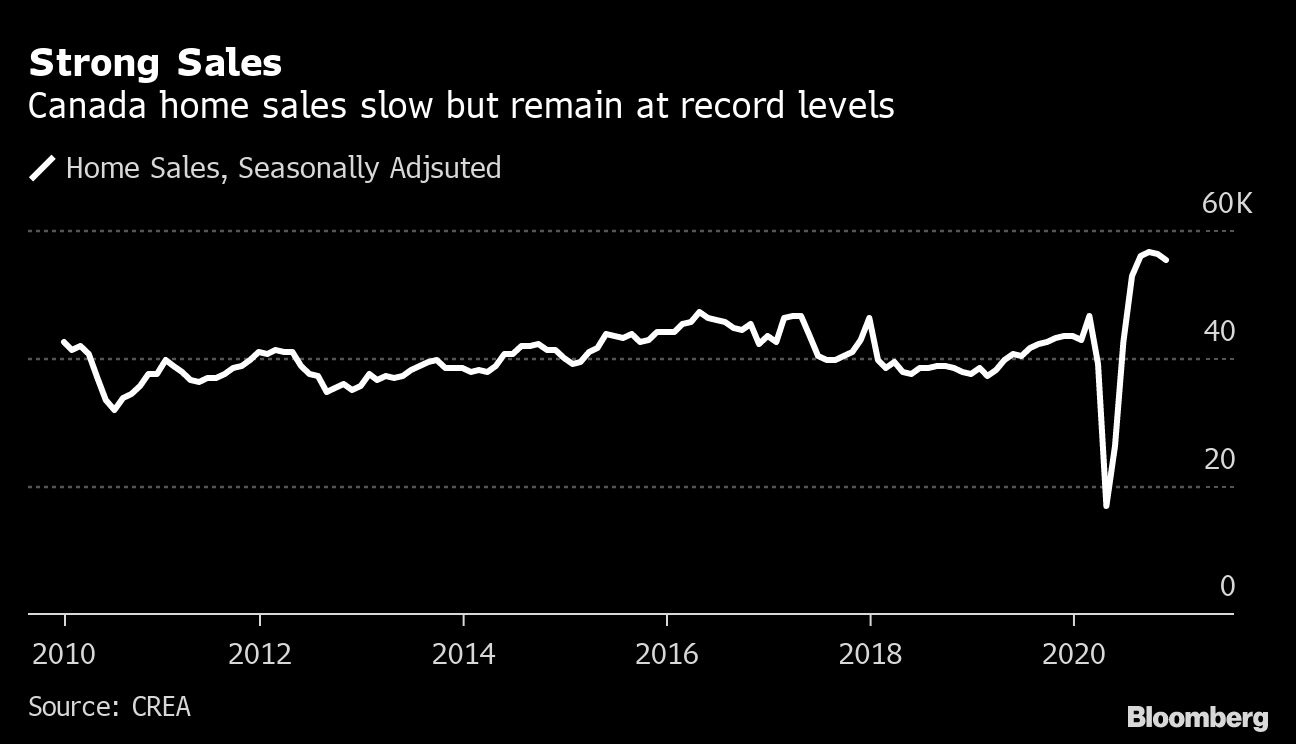 Canada’s housing market is holding up, even after the boom over the summer began to wane. Record-low interest rates and strong demand for more spacious accommodation are pushing prices and sales to near record highs. While sales have slightly weakened in October and November, the gains over the past year are close to a record.

“The level is still extremely strong,” Robert Kavcic, senior economist at Bank of Montreal, said by phone. “If anything, sales are holding up better than most would have expected.”

Despite the historic setback to the market earlier this year caused by the pandemic, CREA projects national sales will hit a record of 544,413 units in 2020, representing an 11.1 per cent increase from 2019, and rise again next year by 7.2 per cent to around 584,000 units.

The monthly drop in sales reflected fewer transactions in about 60 per cent of all local markets, particularly in Toronto, Vancouver, Montreal and Ottawa, the report said. Still, on an annual basis sales activity was up 32.1 per cent in November. That’s a new record for that month by a margin of well over 11,000 transactions, CREA said.

New listings dropped 1.6 per cent in November. The national sales to new listing ratio was unchanged at 74.8 per cent, versus a long-term average of 54.2 per cent.

Conditions are tight. There were 2.4 months of inventory nationwide, CREA said. That’s the lowest reading on record for this measure.

“If I had to sum up the Canadian housing story in 2020, I would say it’s gone from weakness because of COVID-19 to strength despite COVID-19,” Shaun Cathcart, senior economist at CREA, said in the statement. “It will be a photo finish, but it’s looking like 2020 will be a record year for home sales in Canada despite historically low supply.”