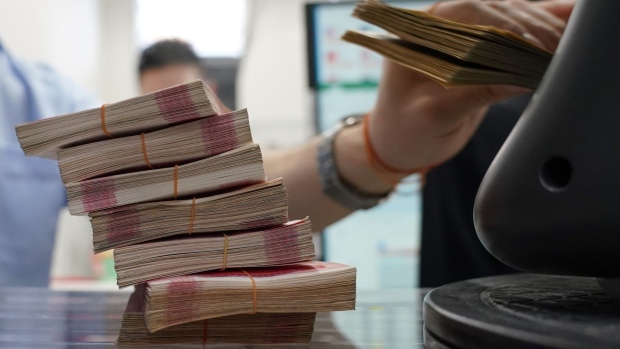 Bundles of Chinese yuan banknotes at the Ninja Money Exchange, operated by Interbank HD, in the Shinjuku district of Tokyo, Japan, on Thursday, June 9, 2022. Caught in the crossfire between the two wildly different monetary policy regimes in Tokyo and Washington, at one point Tuesday, the Japanese currency was less than one yen away from its 2002 high of 135.15 per dollar. Photographer: Toru Hanai/Bloomberg , Bloomberg

(Bloomberg) -- The People’s Bank of China will create a yuan reserve pool with the Bank for International Settlements and five other regulators to provide liquidity to participating economies in periods of market volatility.

China along with Indonesia, Malaysia, Hong Kong, Singapore and Chile will each contribute a minimum of 15 billion yuan ($2.2 billion) or US dollar equivalent to so-called Renminbi Liquidity Arrangement, according to a PBOC statement on Saturday. The funds will be placed with the BIS.

“When in need of liquidity, participating central banks would not only be able to draw down on their contributions, but would also gain access to additional funding through a collateralised liquidity window,” according to the statement.

The agreement marks the latest step from Beijing to push the internationalization of the Chinese currency, challenging a global financial system dominated by the US dollar.