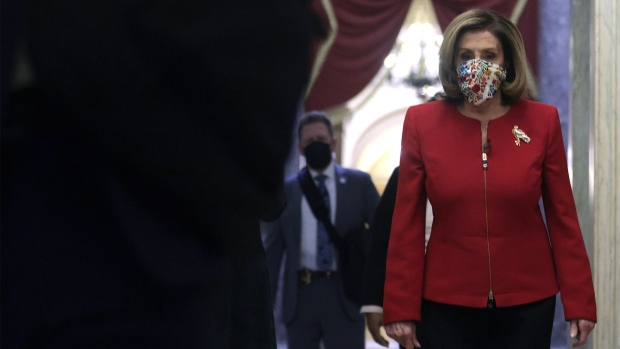 Pelosi said Friday Democrats “will preserve every option” to force Trump from office, either through the 25th Amendment or impeachment and she’s instructed the Rules Committee to be ready to move forward with a motion or resolution.

“With great respect, our deliberations will continue,” Pelosi said in a statement. If Democrats follow through, Trump would be the first U.S. president to be impeached twice.

Text of the proposed impeachment resolution includes a single article accusing Trump of “Incitement of Insurrection,” and says he engaged in high crimes and misdemeanors by “willfully inciting violence against the government of the United States” in connection with the storming of the Capitol Wednesday by a mob of his supporters.

Earlier in the day, President-elect Joe Biden suggested Democrats should not spend time on impeachment, saying that his inauguration on Jan. 20 will be the quickest way to remove Trump from office.

“If we were six months out we should be doing everything we can to get him out of office,” Biden said. “But I am focused now on us taking control as president and vice president on the 20th.”

Any attempt to impeach Trump would be running up against the calendar as well as against divisions among Republicans over how to contain the president during his final days in office. The House would have just days to act before Biden’s inauguration, and it’s not clear that the Senate could move ahead with a trial within a week. Convicting Trump would require support from a significant number of GOP senators.

“We can do this by way of privileged resolution, when we’re meeting in pro forma on Monday, we can introduce it. Then, the leadership will decide whether or not we will take it up and whether they will call us back into session,” Representative David Cicilline, a Rhode Island Democrat, said one of the resolution’s sponsors, on CNN.

Pelosi said the House also would move forward with legislation drafted by Maryland Representative Jamie Raskin to establish an permanent independent commission to accelerate the process of removing a president under the 25th Amendment if incapacity is found.

Pelosi in a letter to Democrats earlier on Friday warned that Trump is so “unhinged” and said that she sought assurances from the nation’s top military commander that safeguards are in place in case he initiates an armed conflict or tries to launch a nuclear strike.

Democrats and some Republicans have blamed Trump for encouraging his supports to swarm the Capitol as lawmakers were formally counting the Electoral College votes affirming Biden’s victory in the presidential election. There were at least five deaths and dozens of injuries resulting from the mob’s clashes with police.

Pelosi and Senate Democratic leader Chuck Schumer have urged Vice President Mike Pence to invoke the 25th Amendment to remove Trump from office, and implored congressional Republicans to join in pressuring the president to step down.

Calls for Trump to resign have been growing in Congress, including among some Republicans. GOP Senator Lisa Murkowski of Alaska told the Anchorage Daily News that the president should resign, and she questioned her future as a Republican if the party doesn’t break with the outgoing president.

“I want him to resign. I want him out,“ Murkowski said in a Friday interview with the newspaper.

Other Republicans implored Pelosi and Democrats not to go ahead with another impeachment.

South Carolina Senator Lindsey Graham, who has been one of Trump’s closest allies, said if Pelosi pursued Trump’s impeachment now, it would “do more harm than good.” He appealed to Biden, who has said he wants to govern in a spirit of bipartisanship. “I’m hopeful President-elect Biden sees the damage that would be done from such action.”

House GOP leader Kevin McCarthy, who backed objections to the electoral vote count, said in a statement that he would try to contact Biden as well to talk to him “about how we must work together to lower the temperature and unite the country to solve America’s challenges.” McCarthy said pursuing impeachment would further divide the country.