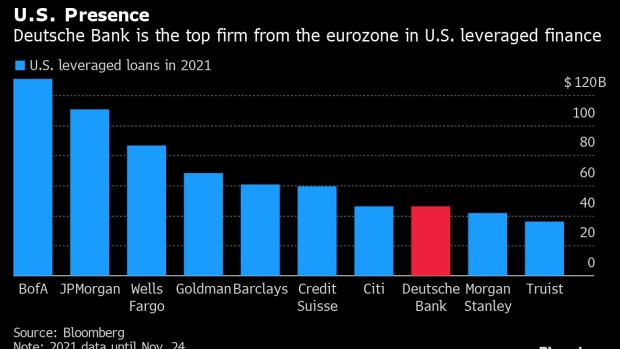 (Bloomberg) -- The European Central Bank is weighing curbs on the riskiest part of banks’ lending to indebted companies amid fears of a potential blow-up in the market, according to people with knowledge of the matter.

Officials on the ECB’s supervisory board have discussed capping newly originated highly-leveraged transactions at a certain share of individual banks’ balance sheets, the people said, asking not to be identified as the matter is private. Still, some members are reluctant to follow that course if banks can show that they’re adequately managing risk, the people said. Talks are at an early stage and caps may not be the chosen action, they said.

The leveraged loan market has been on a tear this year, especially in the U.S., as private equity firms cash out of companies and investors seek protection against inflation. Deutsche Bank AG has counted on the lucrative business as a key contributor to its investment bank as a pandemic-driven trading rally peters out. The German lender could be among the most impacted banks should the ECB decided to impose curbs.

Deutsche Bank’s leveraged loans unit generated more than $300 million in revenue in 2020, helped by lead roles on some of the year’s biggest deals including $23 billion in loans to T-Mobile to acquire rival Sprint, according to data compiled by Bloomberg. The bank ranks eighth in U.S. leveraged loans, up from ninth place last year, the data show, and fourth in Europe, the Middle East and Africa.

An ECB spokeswoman and Deutsche Bank spokesman declined to comment.

Even as banks have been more active lenders, they tend to sell on most leveraged loans to investors and keep a small share on their books. For example, Deutsche Bank has underwritten leveraged loans this year that would represent about 4% of its balance sheet, data compiled by Bloomberg show. But leveraged debt capital markets accounted for just 1% of the firm’s 445 billion-euro loan book at the end of June, company filings show. One of the concerns for regulators is whether willing buyers will be around in a downturn.

Even before the pandemic raised the prospect of a wave of corporate defaults the central bank had urged firms to be cautious in leveraged finance.

In guidance issued in 2017, the ECB defined leveraged finance as loans to companies which result in debt amounting to four times the borrower’s earnings before interest, tax, depreciation and amortization. Credit exposures where the borrower is owned by one or more financial sponsors, like private equity firms, also come under the classification. Transactions with “high levels of leverage” -- meaning debt exceeding six times Ebitda at inception of the deal-- should remain the exception because that “raises concerns” for most industries.

Deutsche Bank has dialed back risk in the business after ECB feedback, Chief Financial Officer James von Moltke said in July. That came after Bloomberg had reported in the previous month that the lender faces higher capital demands if it doesn’t slow the pace of leveraged lending.

European regulators are still concerned about the risk Deutsche Bank and other firms are taking in leveraged loans, according to the people familiar with the matter. Barclays Plc, BNP Paribas SA and Credit Suisse Group AG are among Deutsche Bank’s biggest European rivals in the business, according to data compiled by Bloomberg.

The ECB plans to prevent the build-up of “unmitigated risks” in leveraged finance by undertaking inspections at banks and taking account of underwriting standards, the management of syndication risk, and banks’ risk appetite and capital requirements, according to Elizabeth McCaul, a member of the ECB’s supervisory board.

“We are concerned about increasing risks in the market for leveraged loans, which is driven by the search for yield in an environment of sustained low interest rates,” she said in a speech on Wednesday. “Leveraged issuances have continued to increase in Europe and elsewhere, and this has been accompanied by a loosening of lending standards.”