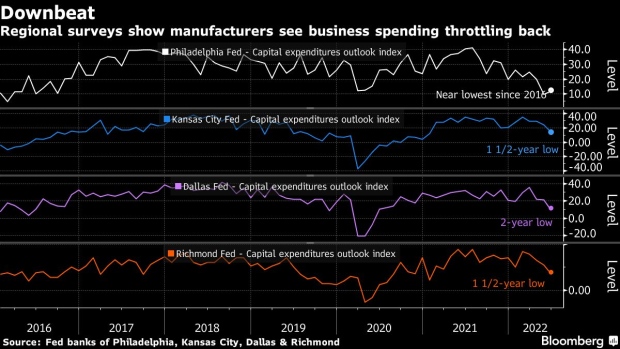 Pedestrians carry shopping bags on Geary street in San Francisco, California, US, on Wednesday, May 18, 2022. US retail sales grew at a solid pace in April, reflecting broad-based gains and suggesting demand for merchandise remains resilient despite rampant inflation. , Bloomberg

(Bloomberg) -- An influx of data showing softer consumer spending, sagging sentiment and subdued manufacturing suggest a US economy with a more fragile foundation, prompting several forecasters to lower their estimates for growth.

Notably, inflation-adjusted personal spending declined in May for the first time this year, and gains in each of the prior four months were revised down, indicating that demand earlier in the year was weaker than previously thought. Home sales and manufacturing surveys are also showing signs of trouble.

The weakness in consumer spending, which is by far the biggest contributor to US gross domestic product, compounded the souring outlook that already had some optimists turning cautious earlier in the week. Morgan Stanley economists now expect GDP to grow at a 0.3% annualized rate in the second quarter, down sharply from 2% just days ago.

Data out Wednesday showed the economy shrank 1.6% in the first three months of the year -- lower than previously reported due to a sharp downward revision to consumer spending.

Stephen Stanley at Amherst Pierpont Securities slashed his second-quarter growth estimate Thursday almost a full percentage point to 2.2%, saying in a note that “the consumer spending picture has darkened dramatically.”

While slower demand may be good news for the Federal Reserve, which has been aggressively raising interest rates in an effort to curb decades-high inflation, concerns about a recession continue to grow.

Inflation-adjusted spending declined a larger-than-expected 0.4% in May, led by a drop in outlays on goods. Spending on services, though, proved resilient, suggesting that consumers are rotating away from purchasing items like furniture and cars and more toward things like international travel as pandemic-related health concerns fade.

Still, the overall slowdown in household spending feeds in a narrative that the economy is stumbling toward a recession.

“We still think services spending will carry consumer spending through the summer, but once Labor Day comes, the boost from services may not be enough to keep overall consumer spending in the black,” Wells Fargo & Co. economists said in a note Thursday.

What’s more, consumer confidence continues to backslide. The University of Michigan’s measure of sentiment slid more than 8 points in June to a record low of 50. Data this week from the Conference Board showed a similar build in pessimism, reflecting the dimmest expectations in almost a decade.

Nearly 30% of Conference Board survey respondents said they expect business condition to worsen in the next six months, the largest share since March 2009, during the height of the financial crisis.

In the Kansas City Fed district, which managed to show moderate, yet slowing growth in manufacturing activity, one undisclosed respondent noted that their “customers over-orders and have excess supply in the near term” while another mentioned that input inventories were “at an all-time high.”

Combined, the surveys highlight growing unease about elevated inflation and the outlook for demand as Fed Chair Jerome Powell and his colleagues step harder on the monetary policy brakes. With order books becoming thinner, against a backdrop of elevated retail inventories, there’s a risk that production will slow.

This week, revised gross domestic product data showed inflation-adjusted business inventories grew at an annualized rate of nearly $189 billion in the first quarter. That followed a record $193.5 billion increase at the end of 2021 and marked the biggest back-to-back quarterly build in data back to 1999.

Government data this week on durable goods orders showed business investment in equipment remained firm in May, even in the face of rising interest rates and concerns about the economy. A measure of core capital goods orders advanced a solid 0.5%, while shipments impressed with a second-straight 0.8% gain.

While the figures indicate equipment investment will contribute to economic growth in the second quarter, the latest regional Fed surveys indicate weaker expectations for capital spending in coming months.

Sales of previously owned homes, which make up the majority of the US market, slid for a fourth straight month in May, but housing metrics out this week painted a different picture: stabilization. Both new- and pending-home sales halted their months-long slides, and a gauge of home price growth in 20 US cities finally plateaued.

Even so, extremely elevated home prices paired with the highest borrowing costs in more than a decade may limit substantial further improvement in the market. Mortgage applications were little changed last week after two weekly advances.