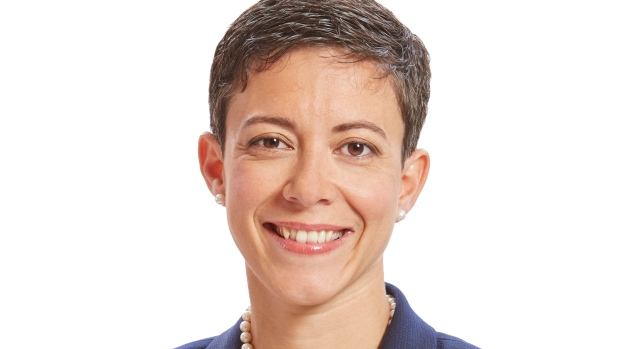 In her 17 months as Laurentian Bank of Canada’s chief executive officer, Rania Llewellyn has seen about a third of the company’s 3,000-person workforce turn over.

She sees that upheaval not as a problem but a chance to rebuild the long-troubled bank anew. If she pulls off a turnaround at Laurentian -- a minnow in an industry dominated by a six-firm oligopoly -- that would mark just the latest noteworthy turn in a career that has defied much of the traditional Canadian banking blueprint.

Llewellyn is staking Laurentian’s comeback on a departure from the orthodoxies of larger rivals. She has committed to a work-from-home-first model in the COVID-19 era and cut the firm’s office space in half, has ruled out lending to oil and gas companies, and is focused on diversity and inclusion efforts so that talented women, minorities and immigrants face an easier climb than she did.

That’s a responsibility that looms large in her thinking. Her appointment as the first female CEO of a publicly traded Canadian bank has prompted support from women and others who rarely see people like themselves in the industry’s top ranks.

“I’m building the bank that I’ve always wanted to work for,” Llewellyn said in an interview at Bloomberg’s Toronto offices Thursday. “I feel like my years of experience really prepared me for that opportunity in terms of the extra pressure.”

Llewellyn, 46, was born in Kuwait to an Egyptian father and Jordanian mother, and immigrated to Canada from Egypt in 1992. She got her start in banking as a part-time teller at Bank of Nova Scotia after graduating from college and finding herself unable to land a professional role -- something she’s attributed partly to a lack of connections in Canada and foreign-sounding maiden name.

She landed her first management position at the company after meeting Scotiabank’s senior vice president for the Atlantic region at her citizenship ceremony and pressing him for a new job over the coming weeks. She ended up spending more than two decades at Scotiabank, holding roles as varied as head of global business payments, CEO of the Roynat Capital commercial-banking unit, head of multicultural banking and senior vice president for commercial banking and growth strategy.

Her projects along that path included developing the infrastructure and power-industry team in capital markets, and helping finance a nuclear-power plant in Ontario.

Now that she’s head of Laurentian, which has corporate offices in Montreal and Toronto, she wants to see her managers appointing women to lead large, complex books of business where they can demonstrate their ability to drive revenue for the bank and their bosses can “see them in action,” Llewellyn said.

“Let’s give them the juicy projects,” she said.

Even before her appointment, Laurentian had already set itself apart by not requiring Canadian experience for new hires, giving immigrants an easier start in the industry. Llewellyn said she wants to build on that reputation, which could be a significant advantage in Canada, where there’s a broad political consensus that attracting skilled newcomers should be central to the country’s economic strategy.

Across Laurentian’s workforce, Llewellyn is also turning to some unconventional benefits. For Laurentian’s 175th anniversary last year, employees were allowed a day off on their birthday. On top of that, the bank gave staffers half a day off on four Fridays during Canada’s short summer season. The extra time off was so well-received that the bank is extending the program, Llewellyn said.

Llewellyn tells even some of Laurentian’s more junior recruits that the firm’s relatively small size means they’ll have opportunities -- like presenting projects directly to the board -- that they wouldn’t have elsewhere. Such perks can help set cost-conscious Laurentian apart in instances where it can’t match the salaries larger rivals offer.

“You can leave your mark on this institution and be part of the success,” she said. “You can’t just boil it down to salary. People leave not because of salary. Salary has to obviously be competitive, but it is not the only deciding factor.”

Among the staff departures that have occurred since Llewellyn took the reins, “some were voluntary, and some were involuntary, because when new leadership comes in, a lot of them say, ‘You know what, I’m out.’ And that’s OK,” she said. The bank also cut some jobs, announcing in December that it had trimmed 64 positions and booked $9 million in severance charges as part of its plan to simplify the organizational structure.

“I took the opportunity to flatten the organization,” Llewellyn said Thursday.

While her changes have helped Laurentian’s employee-engagement scores, which could pay off in the longer term, investors are beginning to look for more immediate progress on Laurentian’s income statement, starting with its personal-banking business.

Under Llewellyn, Laurentian introduced its first mobile-banking app after just seven months of development and is rolling out tap payments on debit cards, rectifying two major gaps in its offerings. The bank is working on cutting down the time it takes to approve customers’ mortgage applications and speeding up the process to sign up for new credit cards and deposit accounts.

The plan is gaining some traction. The bank has beaten analysts’ estimates in every quarter Llewellyn has been CEO after missing projections in eight of the 11 quarters before she took over. And the bank’s shares are up 57 per cent since she took over, the fourth-best performance in the eight-company S&P/TSX Commercial Banks Index, an improvement from last place in the prior 12 months.

Beyond the concrete moves, Llewellyn points to culture as a driving force in the improvement so far. That has included a cost-conscious mindset, the breaking down of silos and implementing a more-casual atmosphere, with employees not expected to wear ties unless they’re meeting clients who will be similarly dressed, she said. Those moves would be harder to make at one of Laurentian’s larger Bay Street competitors.

“The culture was more that our size was a detractor versus my opinion where size is our advantage,” Llewellyn said. “At the end of the day, culture and the tone starts from the top.”