Goldman Sachs is telling investors to prepare for volatility around the November U.S. election, as the coronavirus adds a “major complication” to tabulating results, with a recommendation to extend hedges out to December expirations.

“Delayed primary results, a precedent for extended vote-counting, and a slightly inverted term structure lead us to prefer December hedges to November hedges,” strategists led by David Kostin wrote in a note dated July 7. “Given the several-week delay in finalizing the results of the 2000 presidential election (in addition to the contentious 1876 election), the elevated volumes of mail-in ballots used in recent primary elections, and potential for increased mail in ballots this November, we see heightened risk that election-related volatility could extend beyond Election Day.”

That sort of “blue wave” -- with Democrats in control of both chambers of Congress and the White House -- or a “red wave” -- with Donald Trump winning re-election, and Republicans retaining the Senate and winning the House -- would be “slightly positive” for stocks, UBS Wealth Management strategists led by Solita Marcelli wrote in a note dated July 6. 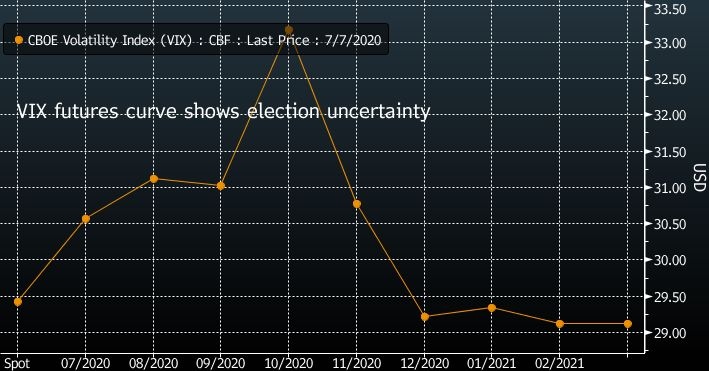 The Democrats would focus on economic growth, while Republicans would extend tax cuts, Marcelli said. The status quo of a Trump victory, with the Senate under Republican control and the House in Democratic hands, would be largely neutral. A Biden victory, with a Republican Senate majority, would be neutral to slightly negative, as an expected increase in regulation might hurt growth, but there likely would be constraints on tax hikes, according to the note.

“Most investors should not make major changes to their portfolios in the lead-up to the election, but it is not too early to start incrementally preparing for potential outcomes,” Marcelli recommended.

The UBS strategists cited several potential differences between the candidates: A re-elected Trump “would focus on deregulation, an ‘America first’ approach to international trade, and tax reductions (which may consist of making permanent and perhaps expanding the tax cuts in the 2017 Tax Cuts and Jobs Act),” they said. Biden “would seek to increase spending on climate change mitigation, expand access to federally funded health care, and raise taxes on corporations and high-income earners.”

With COVID-19 still spreading in many areas of the U.S. and social tensions turning into protests around the country, Trump’s approval ratings have flagged and investors have started to consider more strongly the potential for a Biden victory. A recent RBC Capital Markets survey said investors were more worried about the election than a second wave of coronavirus cases. Trump’s re-election odds stopped moving in tandem with the stock market after the U.S. protests against police brutality and racism.