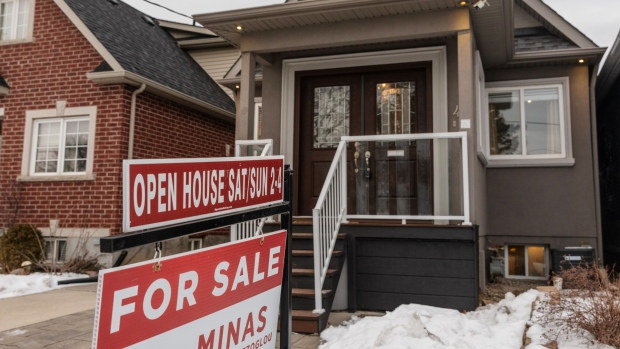 A "For Sale" sign stands in front of a house in Toronto, Ontario, Canada, on Saturday, Feb. 15, 2020. Bloomberg/Brett Gundlock

OTTAWA -- Home sales in February were up sharply compared with February 2019 when sales hit a decade-low for the month, the Canadian Real Estate Association said Monday.

However, TD Bank senior economist Brian DePratto said conditions have changed due to COVID-19 and he expects the market to slow substantially in the near-term, if not retrench.

"That said, sales are well-positioned to make a strong recovery once the impact of the virus dissipates, helped by an ultra-low interest rate environment," DePratto wrote in a report.

"With resale markets generally tight, we expect a rebound of sales activity that brings strong price growth once COVID-19 is convincingly in the rearview mirror."

Mortgage rates have fallen in recent days in the wake of rate cuts by the Bank of Canada.

The central bank has cut its key interest rate target twice to bring it down to 0.75 per cent and has said it is ready to make further changes if required to support economic growth and keep inflation on target.

Sales for February, which included an extra day due to the leap year, were up 26.9 per cent compared with the same month last year.

Sales topped year-ago levels in about 80 per cent of all local markets, including all the large urban markets across the country, the association said.

On a month-over-month basis, sales in February were up 5.9 per cent, boosted by a 15 per cent jump in the Greater Toronto Area.

The number of newly listed homes rose 7.3 per cent in February compared with January.

The increase in the number of sales came as the national average price for homes sold last month rose 15.2 per cent compared with a year ago to $540,000.

Excluding the Greater Vancouver and Greater Toronto Area, the national average price was about $410,000, up 10.5 per cent.