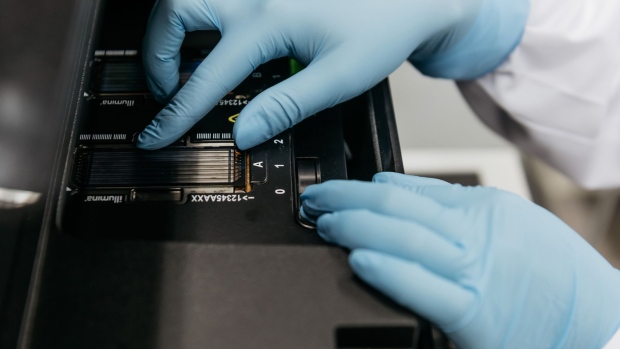 A technician places a flow cell glass slide into an Illumina Inc. DNA sequencing machine inside the Plasma Nucleic Acids laboratory in the Li Ka Shing Institute of Health Sciences at the Chinese University of Hong Kong in Hong Kong, China, on Tuesday, June 20, 2017. , Bloomberg

Illumina Inc.’s shares fell after the genetic sequencing giant agreed to acquire Grail Inc. in a deal valuing the cancer-detection startup at US$8 billion.

Grail shareholders will receive US$3.5 billion in cash and US$4.5 billion in Illumina common stock, the companies said in a statement Monday. Both companies’ boards of directors have approved the transaction.

Illumina is a dominating player in DNA sequencing. Grail, whose investors include Bill Gates and Jeff Bezos, is developing a blood test that aims to detect multiple cancers far earlier than is now possible. While the company said the deal will let Illumina expand diagnostics, the shares fell as investors worried the acquisition would distract from the company’s core business.

“We have an important opportunity to introduce routine and broadly available blood-based screening that enables early cancer detection when treatment can be more effective and less costly,” Illumina Chief Executive Officer Francis deSouza said in the statement.

Announcement of the deal drove the San Diego-based company’s shares down 10.97 per cent to US$263.08 at 3:48 p.m. in New York trading. JPMorgan analyst Tycho Peterson downgraded the company’s shares to neutral, calling the deal a potential distraction from the core recovery next year.

Illumina investors “there will be convincing to do,” said Doug Schenkel, a Cowen & Co. analyst, after the deal was announced.

“We don’t see the clear fit for acquiring a company that (a) is still at a stage where clinical studies and clinical product development are still critical and will be for years,” he wrote in a research note, and “(b) would benefit from true clinical commercial infrastructure/reach that does not really exist at Illumina.”

Grail was founded by Illumina, which holds about 12 per cent of Grail’s shares on a fully diluted basis, according to the statement. It was later spun out as a standalone company.

Grail investors aside from Illumina will receive about US$7.1 billion. Shareholders will also be entitled to future payments representing a tiered single-digit percentage of certain Grail-related revenues.

The company grew out of a discovery at Illumina that signs of cancer were detectable in maternal blood samples. Known as “liquid biopsies,” such tests are a long-sought goal in the world of biomedical research, but developing them is complicated. Tests must look for many markers different markers that may signal different types of tumors, and also successfully avoid false positives.

Grail filed for an initial public offering this month. As a private company Grail has raised more than US$1.9 billion, regulatory filings show. Its much-touted test was planed to launch next year.

Data published by the company has suggested it can detect more that 50 types of cancer and that the test resulted in false positives less than 1 per cent of the time. Illumina, which already has a small business selling diagnostic tests for genetic diseases and cancer therapy identification, will be tasked with bringing Grail’s test to market.

Illumina is also the supplier of the sequencers that Menlo Park, California-based Grail uses for performing its genomic tests. Bringing the two companies back together would put the testing and sequencing under one roof. Illumina’s sequencing business still accounts for the vast majority of its revenue.

The success of the Grail acquisition may hinge on the company’s ability to get insurers to pay for the test.