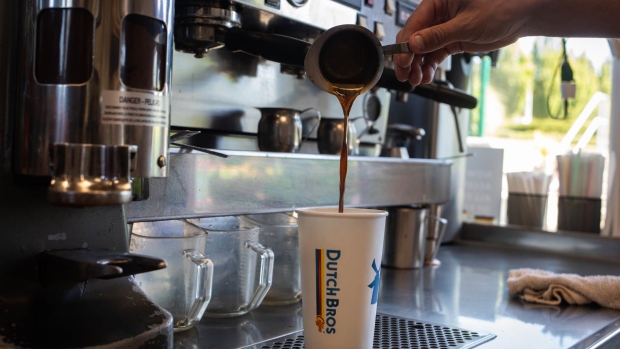 A barista pours a shot of espresso while preparing a drink at a Dutch Bros. Coffee location in Beaverton, Oregon, U.S., on Thursday, June 24, 2021. Dutch Bros. The privately-held chain has recently filed confidentially for an initial public offering. , Bloomberg

(Bloomberg) -- Price surges of 50% or higher greeted a majority of stocks that debuted Wednesday, one of 2021’s busiest sessions for new listings, expanding a global frenzy for equity offerings that’s raised nearly $50 billion in two weeks.

Nine companies went public in New York on Wednesday, tying for the third-busiest session of 2021. Eight of them are now trading higher, with top performers including a 58% pop by Roger Federer-backed shoemaker On Holding AG and a 62% surge in coffee maker Dutch Bros Inc. They’re some of the biggest gainers across the U.S. stock market Wednesday among firms with a market cap above $50 million.

The euphoric reception follows a drop of more than 1% in the S&P 500 since the U.S. Labor Day holiday, right as these IPOs were being marketed to investors. It should be seen as an endorsement of the broader market, according to Gene Song, global head of equity capital markets at Alpine Global Management LLC and former head of institutional equity sales at Citigroup Inc.

“The IPO calendar and overwhelming strong demand is a direct reflection and key indicator overall for the sentiment of the market,” he said in an interview. “Market sentiment still remains extremely strong regardless of what we have been seeing in overall indices.”

This month alone, IPOs and secondary offerings have raised nearly $50 billion globally for corporate issuers and their largest shareholders, according to data compiled by Bloomberg. While book builds began in Wednesday’s IPOs last week, faster-moving secondary offerings raised more than $20 billion during the first four days back from the holiday weekend in the U.S. alone.

As U.S. IPOs join the frenzy this week, their pops have been bigger and more widespread than usual. Among Wednesday’s other new listings, Dice Therapeutics Inc. roughly doubled, Definitive Healthcare Corp. is up 56%, Tyra Biosciences Inc. is up 59%, Procept BioRobotics Corp. is up 60% and Thoughtworks Holding Inc. is up 32%. By contrast, this year’s U.S. IPOs have popped by an average of 9.4%.

Wednesday’s price action follows a broadly positive response to the public offerings in these new listings. A majority of the IPOs priced above their marketed offering ranges and eight were upsized, according to data compiled by Bloomberg. Over the past 12 months, less than 20% of IPOs priced above-range.