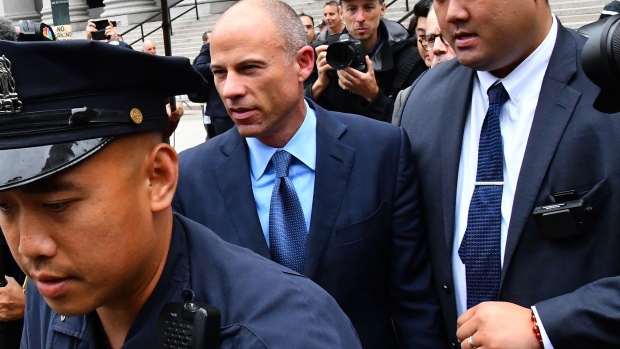 Michael Avenatti, center, exits from federal court in New York on May 28, 2019. , Bloomberg

Michael Avenatti was convicted of trying to extort millions of dollars from Nike Inc. and defrauding a client in the process, completing a steep fall for a celebrity lawyer who shot to national attention by styling himself as a foil for President Donald Trump.

Jurors in Manhattan found Avenatti guilty of all three criminal counts. The verdict on Friday, following a two-week trial, could lead to a long prison sentence for the lawyer, who represented the adult-film actress Stormy Daniels in lawsuits against Trump.

Avenatti, 48, showed no reaction as the verdict was read. He plans to appeal, his lawyer Scott Srebnick said. Sentencing is scheduled for June 17.

“Michael Avenatti has been a fighter his entire life,” Srebnick said. “The inhumane conditions of solitary confinement he has endured over the past month would break anyone but he remains strong. We are all obviously deeply disappointed by the jury’s verdict.”

Before his arrest, Avenatti made regular television appearances to bash Trump and his former fixer, Michael Cohen, over an alleged hush-money payment to his porn-star client before the 2016 election. The brash lawyer also made appearances in court proceedings stemming from the criminal case against Cohen, during which one judge criticized Avenatti’s “publicity tour” and slammed him for injecting himself into the case. His hundreds of thousands of twitter followers ate it up; he even weighed a run for the White House.

The verdict was mocked on Twitter by Donald Trump Jr., who sarcastically said Avenatti is “still doing well amongst the Democrat primary contenders.”

Daniels, who fired Avenatti and accused him of stealing from her, also weighed in. In an Instagram post, she said her former lawyer’s dishonesty “has been revealed on a grand scale.”

“His arrogant, fraudulent and overly aggressive behavior became so pervasive that the jury found his true character,” Daniels wrote.

Avenatti, who lives in Los Angeles, was charged in March after he met with Nike attorneys to discuss claims by his then-client, a youth basketball coach, that the company bribed top players to attend colleges with Nike-sponsored teams. The U.S. said he threatened to make the claims public if Nike didn’t pay him as much as $25 million to investigate the alleged corruption.

Hours before the verdict was reached, the jury asked U.S. District Judge Paul Gardephe to replay a secretly recorded video of Avenatti’s meeting with Nike’s lawyers, in which he used profanity to make his demands.

Avenatti claimed the case was political payback for his clash with Trump, though a judge restricted him from advancing that theory with jurors. He also accused Nike of cooking up the extortion claim to curry favor with prosecutors who were investigating the same alleged conduct.

The jury of six men and six women in Manhattan didn’t buy Avenatti’s defense that he had merely engaged in tough negotiations on behalf of a client who wanted him to “take on” Nike. The company has denied wrongdoing.

“The verdict speaks volumes,” Nike said in a statement. “We thank the jurors for their time and service which is the bedrock of the American judicial system.”

Avenatti’s legal problems may only grow. He’ll go on trial again in April on New York charges that he stole a book advance intended for Daniels, who fired him. And in California, he’s accused of ripping off several clients and defrauding the Internal Revenue Service.

In the Nike case, prosecutors said Avenatti made demands of the company while representing Gary Franklin, a coach in California who claimed to have extensive evidence that Nike had been paying cash bribes to top high school players in 2016 and 2017.

Federal prosecutors in Manhattan began investigating Beaverton, Oregon-based Nike over the potentially illicit payments in 2017, when Adidas AG was hit with a related scandal. When Avenatti made his demand, Nike’s lawyers went to the government to report his conduct.

Scott Wilson, a lawyer for Nike who worked at Boies Schiller Flexner LLP at the time, was directed by federal agents to secretly record subsequent phone calls with Avenatti as well as their in-person meeting. Wilson, now with DLA Piper LLP, was the government’s first witness in the trial. Jurors also heard from Franklin and a senior Nike in-house lawyer.

Avenatti tried throughout the trial to focus the jury on Nike’s alleged wrongdoing, but the judge limited what he could tell jurors, saying repeatedly that the company wasn’t on trial. Gardephe blocked several of his subpoenas to Nike employees as irrelevant. Avenatti may attack those rulings on appeal.