A Chinese national flag flies as a man uses a smartphone in Shanghai, China, on Tuesday, Nov. 27, 2018. Apple, which has lost a fifth of its value in a tech market rout since October, is poised for another setback after U.S. President Donald Trump suggested that 10 percent tariffs could be placed on mobile phones, like the iPhone, and laptops made in China. , Photographer: Bloomberg/Bloomberg

Some of China’s biggest fund houses are launching products that will give millions of mom-and-pop investors exposure to the nation’s soaring tech firms.

Four exchange-traded funds tracking the Star 50 Index open for subscription on Tuesday and are expected to attract as much as 20 billion yuan (US$3 billion) between them. The ETFs are the first to directly replicate the index, which is derived from the nation’s newest stock venue aimed at fostering technology startups.

The launch comes just days after the Shanghai stock exchange approved Ant Group’s listing on its Star Board, setting the stage for a trading debut as soon as late October. Ant’s dual stock sale in Shanghai and Hong Kong may raise a combined US$35 billion, which would make it the world’s biggest initial public offering ever. The firm, owned by billionaire Jack Ma, would be a candidate for index inclusion after six months of trading, an addition that will force the ETFs to buy the shares. 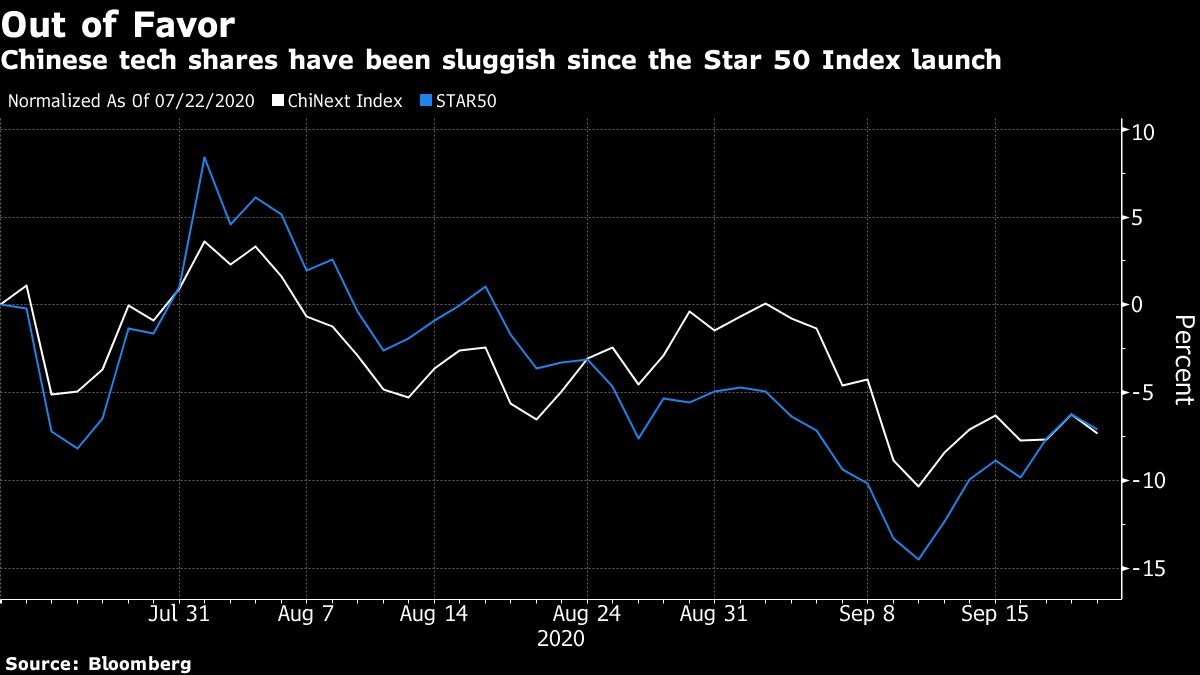 “These ETFs won’t just give China’s vast population of retail investors access to Star shares, they’ll also help bring in incremental flows to the board,” said Zhang Yankun, a fund manager with Beijing Hone Investment Management Co. “Index-tracking flows are key to ensure the stable and healthy development of the board.”

ETFs can be traded in real time and in the U.S. are growing increasingly complex and diverse since the first one came about in 1993. China’s first ETF was launched by China Asset Management Co. about 12 years later. They only started to gain traction in China after MSCI Inc. added yuan-denominated shares to its benchmarks in 2018.

Unlike other major stock markets in the U.S. or Japan, China -- the world’s second largest -- isn’t overrun by ETFs. Individual investors haven’t caught on to the products even though costs can be a lot lower than with mutual funds, partly due to little demand for individual stock research.

Despite this year’s growth -- ETFs in China nearly doubled in value in the first half -- there was still just US$157 billion invested in mainland-listed ETFs at the end of June, according to data compiled by Bloomberg. Equity funds account for about 0.3 per cent of China’s stock market capitalization. The U.S. ETF market is worth more than US$4 trillion, with 75 per cent of the funds tracking stock benchmarks.

For retail traders -- even those eligible to buy stocks directly through their trading accounts -- getting a slice of Ant’s IPO will be highly competitive. The retail portion for new shares on Shanghai’s Star board is often hundreds or even thousands of times oversubscribed, leaving many hopefuls without a single allocation.

Buying into a cheap ETF might be the next best thing.