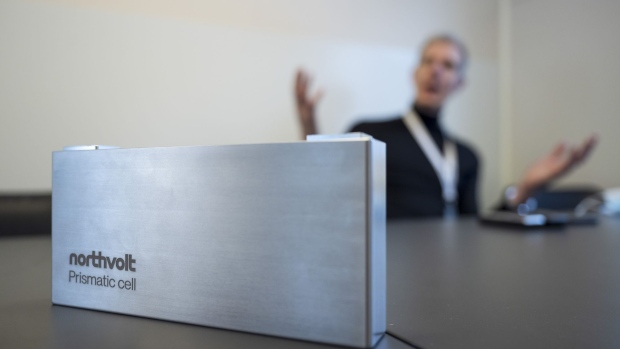 A Lithium-ion prismatic cell battery at the Northvolt Ett AB plant in Skelleftea, Sweden, on Thursday, Feb. 17, 2022. Sweden's Northvolt is leading an effort to forge a regional champion that can beat rivals from Asia. , Bloomberg

(Bloomberg) -- Swedish battery-maker Northvolt AB has defied the market gloom surrounding startups by securing new funds at last year’s valuation of $12 billion, according to a person familiar with matter who asked not to be identified because the details are private.

The company said in a separate statement that it had signed a $1.1 billion convertible note to finance an expansion of its production capabilities in Europe. The new funds arrive as other high profile private companies in Sweden, such as Klarna Bank AB, have seen their valuations plummet amid a cooler climate for raising capital.

Part of the proceeds will help Northvolt develop cathode material production, which the company says is a key component of its strategy to establish operations throughout the battery value chain. In May, the battery-maker became the first European firm to start commercial shipments to a carmaker.

Representatives for Northvolt did not immediately respond when asked about the valuation.