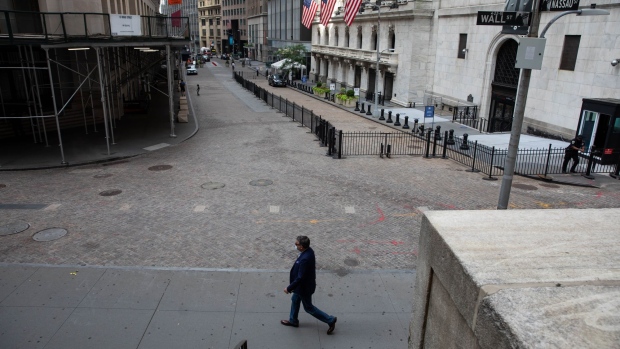 A pedestrian passes in front of the New York Stock Exchange (NYSE) in New York, U.S., on Monday, July 20, 2020. U.S. stocks fluctuated in light trading as investors are keeping an eye on Washington, where lawmakers will begin hammering out a rescue package to replace some of the expiring benefits earlier versions contained. , Bloomberg

The first mutual-to-ETF conversion hasn’t even happened yet, and already the company behind it is planning more.

Guinness Atkinson Funds wants to convert its Alternative Energy Fund into the SmartETFs Sustainable Energy exchange-traded fund, according to a filing with the Securities and Exchange Commission this week.

All three funds are tiny by industry standards, but any conversion would be the first of its kind and a milestone moment for asset management. Cash has been flowing toward ETFs and away from old-school mutual funds for years amid a general quest to cut costs and the disappointing performance of many active money managers.

Even index-tracking mutual funds have not been immune. They saw their first ever outflow for a semi-annual period in the six months through June, losing out to ETFs by the widest margin ever, according to Bloomberg Intelligence.

While Guinness Atkinson is pursuing the first full mutual-to-ETF conversion, similar moves have begun elsewhere in the industry. Vanguard Group has been converting some holdings to its lower-cost ETFs, though these are structured as a share class within the mutual fund business.

The proposed sustainable ETF could invest in companies that support alternative or renewable sources of energy such as solar, wind, hydroelectric and geothermal, according to the filing. If approved, it would adopt the performance history of its predecessor, which was created in 2006 and has a 1.98 per cent expense ratio.