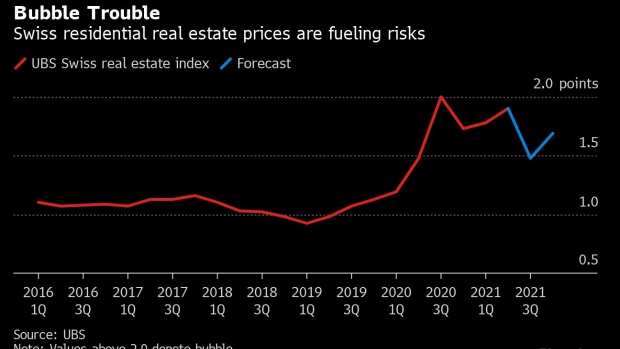 The square in front of the Federal Palace and the headquarters of the Swiss National Bank (SNB) stands almost deserted in Bern, Switzerland, on Friday, March 27, 2020. The global economy’s most abrupt and consequential shock in at least a generation is unfolding at hubs of international commerce as the U.S. and Europe struggle to contain the coronavirus pandemic. Photographer: Stefan Wermuth/Bloomberg , Bloomberg

Swiss National Bank policy makers watching the effects of negative interest rates on the economy are worrying about the real-estate bubble that their policy is helping to foster.

Aware that any shift in their sub-zero stance could unsettle currency markets, officials are likely instead to highlight the availability of regulatory tools to cool the property market at their decision on Thursday.

While they could stop short of recommending a reactivation of the bank-capital buffer suspended early in the pandemic, policy makers may at least reiterate Vice President Fritz Zurbruegg’s stern warning this month that real-estate risks have continued to build.

Switzerland has experience dealing with property bubbles amid the constraints of its ultra-loose monetary policy, and previously resorted to such so-called macroprudential tools to keep gains in check. The country is one among several from New Zealand to Denmark whose real-estate markets have spiraled higher in the wake of the pandemic.

“If you’re in charge of financial stability, you should be serious and say stern things,” said Stefan Gerlach, the Zurich-based chief economist of EFG International AG who was deputy governor of Ireland’s central bank in the aftermath of its housing collapse. “You don’t know when you’re going to have a car crash, so you always have a safety belt on.”

Any commentary on the property market will accompany the SNB’s quarterly decision at 9:30am in Zurich on Thursday. It’s almost certain to reiterate its buzzword for the franc as being “highly valued” to justify its easy monetary-policy stance with the world’s lowest interest rate of -0.75%. Officials will release new growth and inflation forecasts.

There’s a question mark over the participation at Thursday’s decision of President Thomas Jordan, who has been waylaid by medical treatment since August. While he’s in frequent contact with colleagues, an official return-to-work date hasn’t yet been set, Zurbruegg said on Sept. 11.

Designed to prevent too much of a rise in the currency, the SNB’s ultra-easy policy of negative rates and occasional currency-market interventions has protected economic growth at the expense of a buoyant real-estate market. A UBS Group AG indicator deems the situation there as close to a bubble.

In force since 2013, the countercyclical capital buffer on banks’ mortgage assets was deactivated in March 2020 as part of an effort to free up 26 billion francs ($28 billion) worth of capital for financial institutions to prevent a credit crunch caused by the pandemic.

The SNB only makes recommendations on use of the tool, and any decision to deploy it is a political judgment taken by the Swiss government

“It may come back because now credit supply is good, in this and many other respects the economy is recovering,” though officials may also choose to wait to gauge the effect of a fourth pandemic wave, said Ursina Kubli of Zuercher Kantonalbank. “I don’t think it’ll curb the market that much, but it has got a signaling effect.”