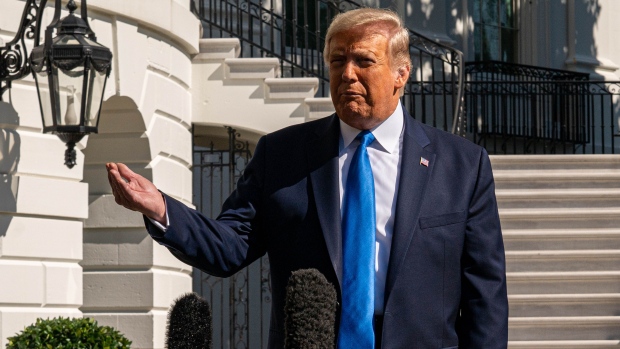 U.S. President Donald Trump speaks to members of the media before boarding Marine One on the South Lawn of the White House in Washington, D.C., U.S., on Thursday, Oct. 15, 2020. , UPI/Pool/Bloomberg

President Donald Trump said he may release a transcript of an interview he taped for the CBS News program “60 Minutes” on Tuesday, saying it would show bias by the reporter, Lesley Stahl.

The interview is scheduled to be broadcast Sunday, but Trump threatened to release it in advance in a tweet. In another tweet earlier Tuesday, he criticized Stahl for not wearing a face mask after their interview, a hint that the conversation was contentious.

I am pleased to inform you that, for the sake of accuracy in reporting, I am considering posting my interview with Lesley Stahl of 60 Minutes, PRIOR TO AIRTIME! This will be done so that everybody can get a glimpse of what a FAKE and BIASED interview is all about...

Stahl exceeded a time limit for the interview agreed to with the White House, according to a person familiar with the matter, angering Trump. He refused to record a “walk-and-talk” segment with Stahl, the person said.

But the “CBS Evening News” said Tuesday night that Trump cut the interview short, and that Stahl had worn a mask when she entered the White House and before the interview. The photo of her not wearing a mask, CBS said, was taken right after the interview, during a conversation with her producers.

The president and Stahl spoke for about 40 minutes on such topics as the use of masks during the coronavirus pandemic and health care, another person said, adding that the White House had a camera in the room for archival purposes.

Vice President Mike Pence was interviewed separately by “60 Minutes.” The Democratic nominee, Joe Biden, and his running mate, Senator Kamala Harris, will also appear on the same program. Biden will be interviewed by Norah O’Donnell, the anchor of the “CBS Evening News.”

--With assistance from Justin Sink, Jordan Fabian and Christopher Palmeri.