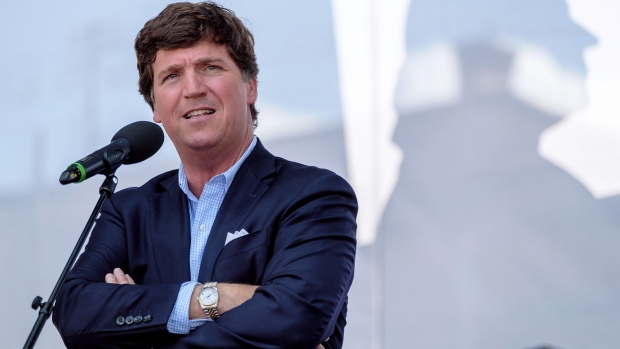 (Bloomberg) -- Fox News may have to hand over the performance reviews of Tucker Carlson and other top on-air personalities if its foe in a defamation lawsuit over election rigging gets its way.

Having the reviews will help boost the $2.7 billion defamation suit against Fox if they reveal a pattern of lying and show the network acted with actual malice, Dominion said in a court filing Thursday. The lawsuit is one of several multi billion-dollar cases brought by Dominion over debunked claims that it conspired with foreign hackers and corrupt election workers to flip votes away from former President Donald Trump.

“These documents are relevant to Fox’s oversight of its on-air personalities and Fox’s knowledge of whether they were prone to lie and mis-inform the public on their shows,” Dominion said in the Delaware court filing.

Fox, which has asked the judge to dismiss the case, didn’t respond to a message seeking comment. The network has said that the reviews are privileged and irrelevant to the suit, according to Dominion’s filing.

The reviews are among a slew of documents Dominion says Fox has resisted turning over. The company is seeking communications about the Trump administration’s reaction over the network’s coverage of the election at the time, as well as “the effect of that reaction on Fox’s ratings and viewership,” Dominion said.

“This discovery goes to Fox’s motivation for its publication of the defamatory statements, namely Fox’s attempts to increase ratings and to please President Trump, which goes to establishing malice,” Dominion said in the filing. Malice is the level of intent a company is required to prove in a defamation case.

Fox has argued Dominion cannot prove actual malice and that the network was simply doing its job by reporting on a major controversy tied to the election. The network is awaiting a ruling on its motion to dismiss the Dominion suit.

A judge has already allowed Dominion’s other lawsuits related to the claims of election rigging to proceed. Those cases are against Trump lawyer Rudy Giuliani, former Trump campaign attorney Sidney Powell and MyPillow Inc. Chief Executive Officer Mike Lindell. All three appeared on Fox to spread the conspiracy theory.