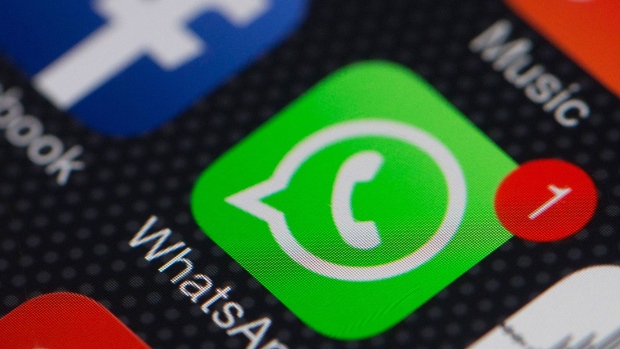 The WhatsApp Inc. mobile-messaging application WhatsApp and the Facebook Inc. application are displayed along with other apps on an Apple Inc. iPhone in this arranged photograph taken in Hong Kong, China, on Thursday, Feb. 20, 2014. Facebook, the worlds largest social network, agreed to acquire mobile-messaging startup WhatsApp Inc. for as much as $19 billion in cash and stock, seeking to expand its reach among users on mobile devices. Photographer: Bloomberg/Bloomberg , Photographer: Bloomberg/Bloomberg

WhatsApp now has 2 billion users -- 500 million more than it had just two years ago.

The messaging service announced the latest tally Wednesday, about six years after Facebook Inc. acquired the app for US$19 billion. WhatsApp is the largest messaging platform in the world, though it makes virtually no money and recently set aside plans to introduce ads.

WhatsApp also defended its use of encryption just a few months after clashing with politicians in Washington over the technology. Facebook argues that encryption, which prevents anyone, including Facebook, from reading users’ messages, is good for user privacy, though it also makes it harder for law enforcement to track and monitor some criminal behavior.

“Strong encryption is a necessity in modern life,” according to a WhatsApp blog post. “We will not compromise on security because that would make people less safe.”