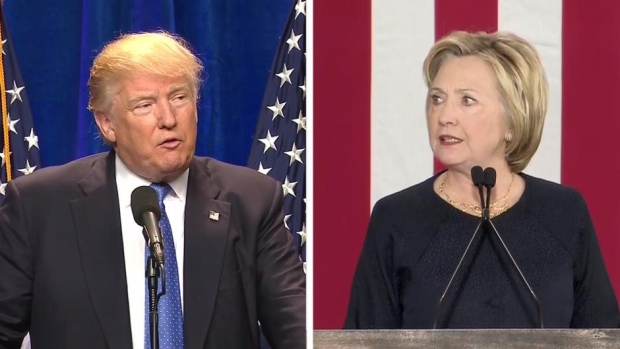 From the Trans-Pacific Partnership to the proposed Keystone XL pipeline project, a number of issues at the forefront of the U.S. presidential election could impact Canada’s economy and its relationship with the U.S.

Last month, BNN polled viewers by asking which candidate’s platform would be better for Canada’s economy and stocks. The response was nearly split with 51 per cent choosing Republican nominee Donald Trump, while 49 per cent sided with Democratic candidate Hillary Clinton.

VOTE: Which U.S. presidential candidate’s platform would be better for Canada's economy and Canadian stocks? https://t.co/y7er4wt7Iy

There’s been a wide range of speculation about which candidate will win the Nov. 8 election, with many analysts viewing a Clinton win as less risky for financial markets. However, public opinion polls are nearly tied just one week before the vote, with Clinton barely ahead.

Here’s a breakdown of some of the candidate’s key economic platforms and how each one could impact Canada.

Anti-trade rhetoric has been a constant theme throughout the election, with particular attention given to the North American Free Trade Agreement (NAFTA) and the Trans-Pacific Partnership. Both the U.S. and Canada signed the U.S.-Canada FTA in 1989, which later saw the addition of Mexico to create NAFTA in 1994. The TPP, an agreement that would allow free trade between a dozen countries surrounding the Pacific Rim including Canada, has not yet been ratified but has been front and centre in both Clinton and Trump’s campaigns.

Donald Trump: Trump has routinely said he would renegotiate NAFTA if he were elected, criticizing former U.S. President Bill Clinton for signing the deal more than two decades ago. Trump has argued that NAFTA has resulted in the loss of U.S. manufacturing jobs to other countries like Mexico. He has threatened to bow out of the deal altogether if the other two trading partners are unwilling to negotiate. Trump is also against the Trans-Pacific Partnership.

Hillary Clinton: Clinton has also taken a strong stance against the Trans-Pacific Partnership, saying it “does not meet her high standard of raising wages, creating good-paying jobs and enhancing our national security.”  Her current position flies in the face of what she said in 2012, however, when she called the potential deal the “gold standard” when it was still in early negotiation stages. Clinton seems to support NAFTA, even though she criticized the agreement when she last ran for Democratic presidential nominee in 2007-08.

With $2.4 billion worth of goods and services traded between Canada and the U.S. per day, an alteration to the trade agreement could impact Canada's economy and would be a concern for policymakers, analysts have said.

“Any move to roll back NAFTA would weigh on [consumer staples and discretionary stocks] that rely on significant access to the U.S. market, with auto parts a notable standout,” Matthew Barasch, Canadian equity strategist with RBC Capital Markets, said in a note to clients last month.

Although a significant change to NAFTA could hurt Canada, one of Trump’s economic advisors, Wilbur Ross, told BNN that the presidential hopeful “is on the right side of the issue” and that Canada shouldn’t worry if Trump gets elected.

“You don’t hear him voice huge complaints about Canada and there’s a good reason for that,” the billionaire investor said.

North of the border, Canadian Prime Minister Justin Trudeau has been a proponent of free trade and recently signed the Comprehensive Economic and Trade Agreement (CETA), a free-trade agreement between Canada and the EU. However, he has yet to ratify the TPP after signing the deal in January. Political commentator and BNN contributor Andy Busch said for Canada, TPP “would hurt some of the auto-supply companies” and “would allow more Japanese cars in and trucks.”

Both candidates have included plans to cut taxes in their platforms and it’s one of the issues they differ on most.

Donald Trump: Trump plans to reduce taxes for people in all income brackets but “especially for working and middle-income Americans.” He has pledged to lower the corporate tax rate to 15 per cent from 35 per cent and says he will reduce the existing seven tax brackets down to three. He has also promised to eliminate the estate tax levied on assets of the deceased.

Hillary Clinton: Clinton has vowed to crack down on corporations by implementing a “fair share surcharge” and reward companies that invest in their workers. She also said she would introduce a standard tax deduction for small businesses. In addition, she wants to make it harder for U.S. companies to avoid taxation by making it more difficult to classify themselves as foreign-owned.

Potential impact on Canada:  Barasch said Trump’s proposed tax cuts would likely deliver a “big boost” to the U.S. economy at least in the near term with a “fairly meaningful” impact for Canadian GDP as a result of the trade relations between the two countries.

But one market strategist expressed doubts about whether either candidate’s promises are even possible. “The math doesn’t work for either one of them,” Bob Iaccino, chief market strategist at Path Trading Partners told BNN in an interview. “If you cut corporate taxes to where Donald Trump wants them, you won’t lose that much revenue. But that’s not going to happen. He’s not going to be able to get that done.”

U.S. President Barack Obama denied approval for the Keystone XL pipeline project in November 2015, which would have seen up to 830,000 barrels of crude oil per day transported from Hardisty, Alta. to Steele City, Neb. In January 2016, TransCanada announced it had taken legal action under NAFTA against the U.S. administration and the project continues to be a matter of contentious debate. Oil prices have also been a concern that both candidates have tackled in their platforms.

Donald Trump: Trump has said he plans to revive the proposed Keystone XL pipeline project, and wants to unleash an “energy revolution” by streamlining environmental regulation, becoming “totally independent of any need to import energy from the OPEC cartel or any nations hostile to our interests.” Trump has also expressed interest in increasing the use of coal for power generation in the U.S.

Hillary Clinton: Clinton plans to maintain Obama’s decision and not approve the Keystone XL pipeline. She has also proposed to cut oil and gas subsides and has said she wants to implement a $60 billion clean energy initiative.

If Keystone XL doesn’t get the green light, it would increase the likelihood that the Canadian government would approve alternate pipeline projects to avoid relying on the U.S. as an export market, Charles St-Arnaud, economist and FX strategist with Nomura, wrote in a report in early October.

As for Trump’s plans to burn more coal, St-Arnaud said “an increase in coal burning in the Midwest would likely translate into an increase in atmospheric pollution in Ontario and Québec, where a large share of the Canadian population lives.” This, he argues, could lead to higher health-care costs for those provinces.

RBC’s Barasch said that a Trump win would be "net positive" for the Canadian economy and Canadian stocks, given his pro-oil platform and plan to revive the Keystone XL, which Barasch said would benefit energy and material sectors.

U.S.-Russia energy relations are also a concern in this election. Global head of commodities strategy at RBC Capital Markets Helima Croft told BNN  a Trump victory could reset the U.S.'s relationship with Russia, which would encourage more energy investment. “I think if you do have this U.S.-Russia reset, there is a chance under a Donald Trump presidency, that those sanctions would be removed, which would be beneficial to those U.S. companies looking to make investments into the Russian energy sector,” she said.

Clinton, on the other hand, would likely impose more sanctions against Russia, according to Croft.  “I don’t think Hillary Clinton is going to be inclined to be softer on Russia,” she said.

Monetary policy has come up during the campaign, even though the issue is supposed to be kept separate from politics.  As James Marple, a senior economist at TD put it, political interference “could result in an erosion of the credibility of the central bank.” After Trump accused the U.S. Federal Reserve of making politically-motivated rate decisions in September, chief economist at Capital Economics Paul Ashworth said in a report that there is a “clear possibility” Yellen would resign almost immediately if Trump won the election.

Trump: Trump has accused the Fed of keeping interest rates low in order to help Obama’s legacy and said that rates should change. “We have a very false economy,” he told reporters ahead of the September rate announcement.

But Yellen assured reporters in a press conference following the September rate decision that none of the Fed’s policy moves are politically-motivated.  "I can say emphatically that partisan politics plays no role in our decisions about the appropriate stance of monetary policy," she said. Trump also said back in April that he would “be inclined to put other people in” Yellen’s role if he were elected.

Clinton: Clinton publically criticized Trump in September for commenting on monetary policy and echoed many critics who have said it wasn’t appropriate.  "You should not be commenting on Fed actions when you are either running for president or you are president," she told reporters. "Words have consequences. Words move markets. Words can be misinterpreted."

Potential impact on Canada: Marple said he expects the Fed to raise rates in December and gradually increase rates over the next year, which will be beneficial to Canada. “The deviation between Canadian and U.S. monetary policy is likely to keep pressure on the Canadian dollar, keeping it relatively close to its current value around 75 cents U.S. over the next year,” Marple said.

If Yellen were to resign before December’s Fed meeting, which Marple said he’s “not convinced” would happen, markets could become more volatile. He added that while Yellen’s resignation is possible, investors shouldn’t worry so much about the event itself, but more so about “the uncertainty and volatility created by an administration so hostile to an independent central bank.”