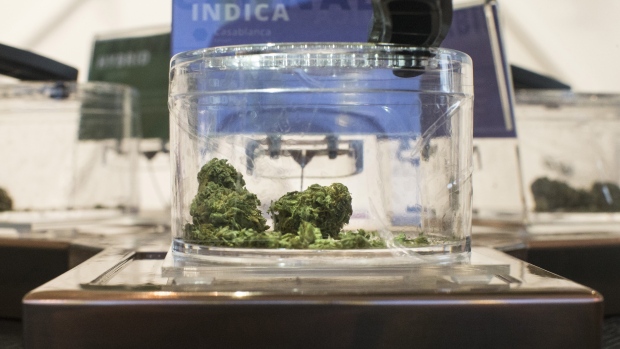 Cannabis sits on display at a licensed Ontario retail store. , The Canadian Press

The MicroSectors Cannabis 2x Leveraged ETN, which is due to begin trading Wednesday under the ticker MJO, is the first of its kind in the U.S. It will charge 95 basis points -- or US$9.50 for every US$1,000 invested -- according to regulatory documents.

It’s a challenging time to invest in pot. While cash has continued to flow into the two largest marijuana ETFs this year, both have lost more than 30 per cent of their value. The ETN is also entering a newly crowded market. A number of money managers have recently started weed funds, and at least six ETFs are currently duking it out for assets in the U.S.

“We are trying to resonate with traders and investors that not only see this as an emerging investment but prefer an exposure that is based on the entire ecosystem,” said Scott Acheychek, president of Fairfield, Connecticut-based REX Shares LLC, which will run the ETN. “The cannabis industry will continue to develop but it’s more than just the cultivators, which have been highly volatile.”

The ETN will track an index that divides the industry into five categories: pharmaceuticals, testing and analytics, cultivators, industrial hemp and ancillary business, Acheychek said.

REX Shares is also starting an unleveraged product -- the MicroSectors Cannabis ETN, or MJJ -- which charges 70 basis points. The Bank of Montreal, which is behind five REX Shares bank ETNs, as well as leveraged and inverse tech notes, is issuing the products.

Unlike ETFs, which are backed by a pool of assets, ETNs are unsecured debt obligations that tend to be sold by banks. That took some investors by surprise in February 2018, when a sharp spike in volatility prompted a note that bet against fluctuations to abruptly shutter.

Still, their popularity has persisted, with 19 new ETN launches this year, data compiled by Bloomberg show. That’s partly because only two issuers in the U.S. are currently able to sell leveraged ETFs, although a new plan from the regulator could broaden issuance.

Horizons ETFs Management Canada Inc. launched the first leveraged and inverse pot funds in May amid a marijuana frenzy.

However, the BetaPro Marijuana Companies 2x Daily Bull ETF, which trades in Toronto, has failed to attract assets, garnering about $5 million (US$3.8 million) since its launch. Its inverse sibling has more than $30 million and has gained 89 per cent.