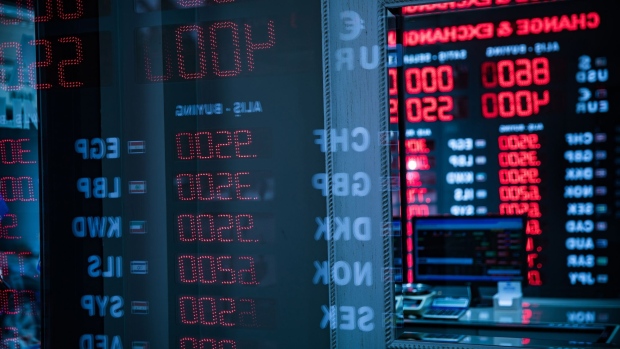 An electronic board displays prices at a foreign currency exchange bureau in the Beyoglu district of Istanbul, Turkey, on Thursday, May 14, 2020. The global demand shock that followed the coronavirus pandemic is exposing a key vulnerability for Turkey’s external finances, with stimulus at home worsening an imbalance between imports and exports while creating another pressure point for the lira. Photographer: Kerem Uzel/Bloomberg , Bloomberg

(Bloomberg) -- A group of banks failed to persuade a judge to throw out a lawsuit claiming they conspired to rig foreign exchange rates.

Sixteen of the world’s biggest banks are accused of conspiring, from 2003 to 2013, to manipulate FX benchmark rates and exchange rates offered to customers. On Thursday, U.S. District Judge Lorna Schofield in Manhattan allowed most of the claims to go forward.

The plaintiffs are a group of 1,300 investment firms and local governments that opted not to participate in an earlier class-action suit that was filed in 2013. They claimed they lost money when they were forced to pay inflated prices to buy and artificially low prices to sell in FX transactions.

Schofield threw out some claims against Barclays Plc, J.P. Morgan Securities LLC and Royal Bank of Canada on the grounds that they weren’t filed on time. She also dismissed SG Americas Securities LLC from the case.

Schofield’s ruling comes before the parties have had a full opportunity to collect evidence and doesn’t reflect a decision by the judge on the merits of the claims.

Lawyers for the banks didn’t immediately respond after regular business hours to requests for comment.