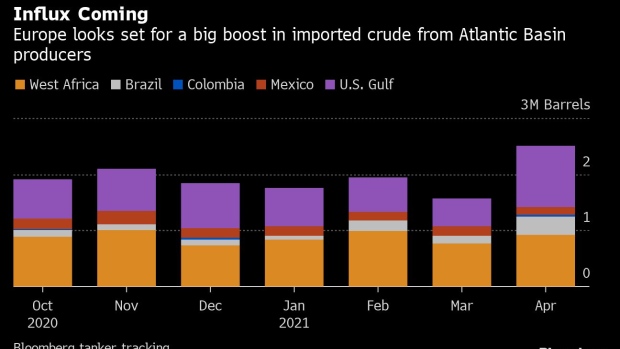 The Nordic Luna, a Suezmax crude oil tanker operated by Nordic American Tankers Ltd., sits at anchor in this view from a fishing boat off the coast of Southwold, U.K., on Friday, May 15, 2020. Nine tankers carrying about 5.58 million barrels of North Sea crude that loaded in April are floating off U.K. ports, according to ship-tracking data compiled by Bloomberg. Photographer: Chris Ratcliffe/Bloomberg , Bloomberg

(Bloomberg) -- Soaring premiums for North Sea oil have led to an influx of crude cargoes into Europe from exporters throughout the Atlantic Basin.

Producers from countries including Nigeria, Brazil and the U.S. loaded almost 1 million barrels a day more crude for European buyers last month than they did in March, according to tanker tracking data compiled by Bloomberg. That included a late-April jump in cargoes from terminals in the U.S. Gulf of Mexico.

North Sea oil prices have fetched hefty premiums this year on the back of a tentative demand recovery in Europe, as well as heavy second-quarter maintenance at fields that supply crudes for the Dated Brent benchmark. That’s made grades from outside the region more attractive in Europe, creating a so-called arbitrage trade into the continent.

“The arbitrage to Europe has opened up, and that should encourage higher inflows particularly from the U.S. and perhaps also Nigeria whilst Indian demand remains in doubt,” said James Davis, director of short-term market research at FGE, a consultant.

Dated Brent, a benchmark for two-thirds of the world’s physical crude transactions, is calculated based on the most competitive price of five grades: Brent, Forties, Oseberg, Ekofisk and Troll, or BFOET. Dated Brent affects Brent futures contracts via a complex web of derivatives.

“The increasing demand from Europe could be tied to anticipation of easing up on lockdowns in the months to come,” said Emmanuel Belostrino, a Houston-based analyst at shipping-intelligence firm Kpler.

Loadings will slump to about 600,000 barrels a day next month, the lowest in at least 13 years, because of maintenance on the pipeline that carries the biggest stream, Forties. They’ve been low throughout this quarter because of other work. That’s a decline of about 30% compared with the average export rate last year, loading programs compiled by Bloomberg show.

Brent averaged a premium of $3.20 a barrel over Dubai crude in April, the highest since November 2019. It was also supported by uncertainty about supplies of light, sweet crude from Libya, according to Payam Hashempour, a senior analyst at IHS Markit.

“Consequently, exporting Brent-linked crudes to typical Asian buyers has become less economical, leading to a scramble for European and West African producers to find outlets for their displaced cargoes within the European market,” Hashempour said, adding once the maintenance season passes in the North Sea, Brent’s premium should ease.