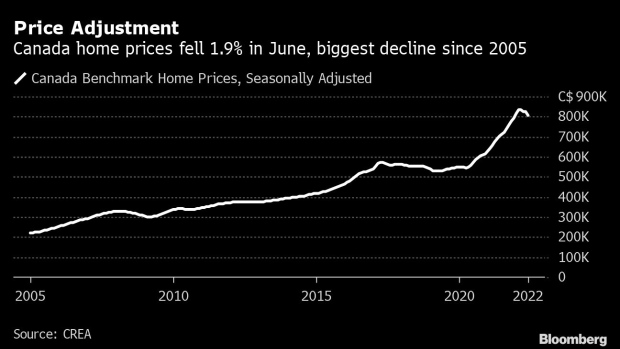 (Bloomberg) -- Canadian homes could lose as much as a quarter of their value as market declines set off by rapidly rising interest rates play out much faster than anticipated, according to Desjardins Securities Inc.

After hitting a peak in February, average home prices in Canada are now expected to fall as much as 25% by the end of next year, economists Randall Bartlett, Helene Begin and Marc Desormeaux said in a report Thursday, with both the declines so far and the rate hikes driving them already out-pacing previous forecasts.

An unprecedented boom over the course of the pandemic drove Canadian home values to record levels, but they’ve reversed just as fast since the Bank of Canada began raising interest rates in March to prevent the broader economy from overheating. While the declines so far have been sharpest in markets with the biggest pandemic run-ups, mainly Toronto and the communities around it, signs are emerging that the weakness is now spreading across the country too.

Royal Bank of Canada has predicted this will be the biggest real-estate correction Canada has seen in at least 40 years. National sales and price data for July are due next week, with Toronto already reporting a 3.9% decline in its home-price index on the month -- capping its worst four-month drop since 2005.

Nevertheless, because the increases the previous two years were so dramatic, average prices should still end 2023 higher than they were before the pandemic, according to the Desjardins economists.

“Canada’s housing market is correcting quickly, and faster than we anticipated,” Bartlett, the firm’s senior director of Canadian economics, and his colleagues said. “While we don’t want to diminish the difficulties some Canadians are facing, this adjustment is helping to bring some sanity back to Canadian real estate. Many markets are returning to balance, and affordability is on track to gradually improve as prices fall.”