M&A activity within the Canadian cannabis sector is heating up and is expected to persist for months as licensed producers seek strategic opportunities to expand their market share while also eyeing a potential pathway toward profitability through cost-cutting.

That activity comes after a recent rush in acquisition announcements from two of the country's top cannabis producers: Hexo Corp. and Canopy Growth Corp., both of which have made several multi-million dollar deals to capture a leading share of the Canadian cannabis market.

Indeed, several cannabis executives told BNN Bloomberg their phones have been ringing more frequently over the past several weeks, with interested bankers or rival operators inquiring about their appetite for a sale.

"Everything was always calling for mass consolidation in the industry and we saw it building, but it's really happening now," said Eric Foster, a partner at Dentons Canada LLP who leads the firm's cannabis practice.

"What we've seen is the smaller LPs and the private LPs putting up their 'For Sale' sign and start some strategic process because it's increasingly hard for them to rationalize their business, find that path to profitability and experience the kind of growth they were expecting."

Data from Viridian Capital Markets shows a strong start in 2021 for M&A activity on both sides of the border. The New York-based cannabis consultancy said there's been 137 deals so far this year, compared with just 32 in the same period last year. While U.S. M&A activity has already hit a new record, Canadian deals are also roaring back this year with 29, more than double what happened in the same period a year ago. 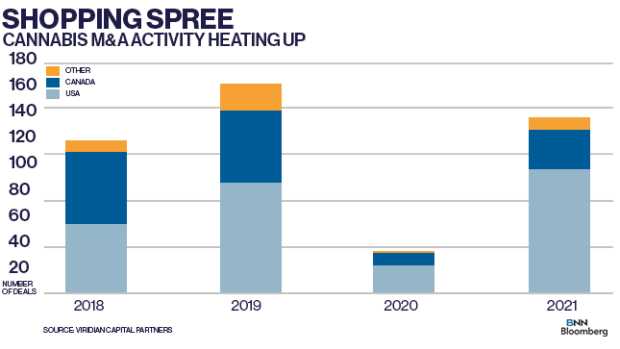 "The consolidation that we're seeing in this industry is really aimed at eliminating duplicating operations and reaching out for product listing that companies didn't have before," said Frank Colombo, director of data analytics at Viridian Capital Advisors, in a phone interview.

John Fowler, president of Muskoka Grown Ltd., said one motive that is driving M&A activity is having an active product available for sale. Recently, several provincial wholesalers have reduced the amount of products listed for sale to cut underperforming brands from the market.

Fowler pointed to Hexo's purchase of 48North Cannabis Corp. for $50 million as an example of how having an available product, even if it's not a big seller, is a valuable commodity that is attractive for larger producers.

"I don't think the brand actually matters but it's that shelf space that does," he said in a phone interview. "The blue ocean moments of new markets, new product categories and new promise aren't happening. We're either in, or fast approaching, a moment where every incremental retail store doesn't necessarily add incremental value."

For some cannabis CEOs, that essentially means dedicating valuable time during their workday fielding calls determining if any offers to merge make sense, although most suggestions are often one sided, executives told BNN Bloomberg.

"I'm getting two calls a day, at a minimum, from bankers asking if I'd be interested in their ideas about a business combination with another LP," said George Scorsis, executive chairman at WeedMD Inc.

"It's my responsibility as the chairman to hear this out. If it's the right opportunity, of course, we need to provide that to the shareholders. But none of them have really been that opportunity."

But some Canadian companies are content remaining independent. Mike Lubarsky, president at MTL Cannabis, a small, privately-held producer based in Montreal, said the company isn't looking to sell, even though he's received several inquiries over the past month.

"We're still enjoying it," he said. "When you become a bigger player with a public company, it changes the game. There's been interesting offers that come in and we talk about it, but we're happy where we're at right now."

Canopy Growth is breaking up with Drake. BNN Bloomberg was first to report the pot giant disclosed in a company filing this week that it has ended its partnership with Drake's More Life Growth Company to sell cannabis in the Canadian and global markets. The two first connected in November 2019 ​in a high-profile deal that helped to usher Drake, one of the most popular musicians in the world, into the billion-dollar cannabis industry. A reason behind the split wasn't immediately provided by Canopy. The company took a total of $43 million in impairment charges related to its venture with More Life, according to the filing. While it's unclear whether More Life will continue to pursue any ventures in the cannabis industry, the company still has active trademark for various cannabis and hemp products, according to U.S. data.

Amazon changed its stance on cannabis on Tuesday, disclosing that it will not screen for the drug for most of its employees while supporting a legalization bill recently re-entered into U.S. Congress. The world's second-biggest retailer – and the U.S.'s largest employer, with 800,000 staff  – said it will no longer consider a positive test for marijuana use as disqualifying when hiring new employees. In a blog post, Dave Clark, the chief executive officer of Amazon’s global retail and logistics business said the company's public policy team will also support The Marijuana Opportunity Reinvestment and Expungement Act of 2021. That bill will legalize marijuana at the federal level, expunge criminal records, and invest in impacted communities, Clark said. Leafly editor Bruce Barcott writes in an opinion column that Amazon's policy shift is a sign that the retailer may start selling cannabis in the U.S. as it already launched a pilot project to sell alcohol, another regulated substance, in 12 cities.

A cannabinoid compound derived from hemp and said to provide the same psychoactive effects as THC is in the spotlight given how some unexpected intoxicants have been found in some of its products. Bloomberg News' Tiffany Kary reports that products containing Delta-8, the unregulated chemical cousin to THC, have seen sales more than double over the past year. But that popularity comes as as chemists and health advocates sound alarms over potentially dangerous contaminants are found in those products, Bloomberg reports. Delta-8 can be made by mixing CBD with battery acid, pool chemicals or even household vinegar, and lab tests found they contain heavy metals such as copper, chromium or nickel. More than a dozen states have placed restrictions on Delta-8, while the U.S. Cannabis Council trade group is urging greater regulatory oversight on products sold with that cannabinoid compound.

Cannabis lounges are set to open in Las Vegas after the Nevada legislature passed a bill allowing those establishments to open as early as this year. The bill creates two new licensing categories for lounges, which allow patrons to consume cannabis in a safe, friendly environment, allowing existing dispensaries to add space for a lounge and independent businesses to build their own consumption areas. Planet 13 Holdings, which operates the largest dispensary in the state, cheered the news and stated it already made plans to open a lounge space in one of its Las Vegas locations "built as soon as possible".

RIV Capital has eyes for the U.S. cannabis market. The Toronto-based company, previously known as Canopy Rivers (the venture capital arm of Canopy Growth) said in its fourth-quarter results that it has "formally shifted its strategic focus" to pursue investments in the U.S. cannabis market. Given that RIV Capital trades on the Toronto Stock Exchange, which does not allow issuers to conduct cannabis business in markets where it's federally illegal including the U.S., that means the company is now looking to delist from the exchange. RIV Capital said it plans to "list its securities on a stock exchange that does not prohibit such investments or acquisitions" and will provide its investors an update soon. During the quarter, RIV Capital sold all its 3.65 million shares it owned in Canopy Growth for $110 million. The company reported a $21.5 million net loss in the quarter.

Raymond James Analysts Rahul Sarugaser and Michael Freeman crunched the numbers of the latest market share figures in the Canadian market, which continues to grow at a steady pace. Pre-rolls seen as the segment which has seen significant growth, now pegged at 21 per cent of the market and up five percentage points from five months ago, the analysts said. Using proprietary sales figures, Raymond James broke down the latest market share rankings for May with April data in parentheses:

CANNABIS SPOT PRICE: $5.53 per gram -- This week's price is down 0.4 per cent from the prior week, according to the Cannabis Benchmark’s Canada Cannabis Spot Index. This equates to US$2,077 per pound at current exchange rates.

The amount of medical cannabis reimbursements authorized by Veterans Affairs Canada in fiscal 2020, according to MJBiz Daily.