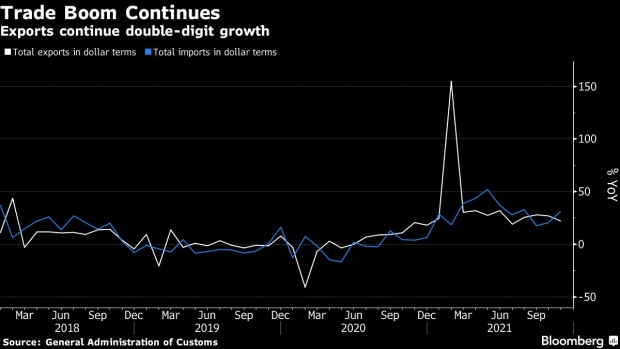 A gantry crane lifts a container at the Yangshan Deepwater Port in Shanghai, China, on Saturday, Oct. 9, 2021. China's trade figures are scheduled to be released on Oct. 13. Photographer: Qilai Shen/Bloomberg , Bloomberg

(Bloomberg) -- China’s exports grew faster than expected in November to hit a record, as external demand surged ahead of the year-end holidays and domestic production rebounded on an easing power crunch.

Exports rose 22% in dollar terms from a year earlier to almost $326 billion, while imports grew 31.7%, leaving a trade surplus of $71.2 billion for the month, the customs administration said Tuesday. Economists had forecast exports to grow by 20.3% and imports to increase by 21.5%.

The data show the continuing strength of global demand for Chinese goods, which has been strong throughout the pandemic. If the spread of the new omicron virus variant proves to be serious and other nations start to lock down again, that will likely provide support for China’s exports, especially personal protective gear and work from home devices.

Exports usually peak at the end of the year, buoyed by the Christmas shopping season, although a higher base for comparison last year might drive the headline growth rate lower.

China’s economy has come under increasing pressure from a deepening housing market slump, which may continue to be a drag on growth over the next year. Policy makers moved to expand support for the nation’s economy Monday, with the central bank announcing a cut to most banks’ reserve requirement ratio which will release 1.2 trillion yuan ($188 billion) of liquidity.

A meeting of the Communist Party’s Politburo on Monday concluded with a signal of an easing in curbs on real estate, and a pledge to stabilize the economy in 2022.