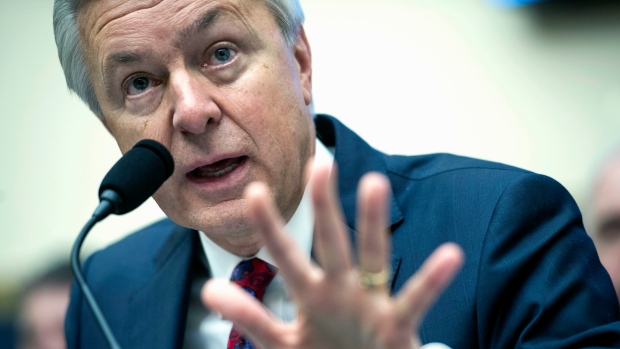 Eight former Wells Fargo & Co. executives are facing almost US$59 million in fines and bans from the U.S. banking industry over their roles in the firm’s scandals as regulators show more appetite to go after individuals.

Former Chief Executive Officer John Stumpf agreed to a US$17.5 million penalty and an industry ban, according to an order Thursday from the Office of the Comptroller of the Currency. Carrie Tolstedt, who led Wells Fargo’s community bank for a decade, faces a US$25 million penalty that the regulator said could climb higher.

“The actions announced by the OCC today reinforce the agency’s expectations that management and employees of national banks and federal savings associations provide fair access to financial services, treat customers fairly and comply with applicable laws and regulations,” Comptroller of the Currency Joseph Otting said in a statement.

Wells Fargo tapped into public and political ire in 2016 with the revelation that bank employees opened millions of potentially fake accounts to meet sales goals. That and a slew of retail-banking issues that subsequently came to light have led to regulatory fallout that’s in many cases unprecedented for a major bank, including a growth cap from the Federal Reserve.

This is the first public step the OCC has taken against former executives related to Wells Fargo’s problems. Regulators received criticism from some corners over the fact that few individuals and no top executives were held accountable for crisis-era missteps that cost the banks billions in fines and penalties.

Stumpf was one of three to agree to consent orders and pay penalties, along with former chief administrative officer Hope Hardison and onetime risk chief Michael Loughlin.

During the OCC’s investigation, Stumpf and others admitted that the bank had systemic sales practice misconduct dating from the early 2000s. Tolstedt and Russ Anderson “asserted their Fifth Amendment right against self-incrimination and refused to answer all substantive questions about sales practice misconduct,” the regulator wrote in a notice of charges.

“Throughout her career, Ms. Tolstedt acted with the utmost integrity and concern for doing the right thing,” said Enu Mainigi, her lawyer at Williams & Connolly. “A full and fair examination of the facts will vindicate Carrie.”

“At all times, Mr. Strother acted with the utmost integrity and transparency, including with the bank’s board, senior management, and its regulators,” Walt Brown, Strother’s attorney at Orrick Herrington & Sutcliffe, said in an emailed statement. “The OCC’s charges against Mr. Strother are false and unfounded, and he intends to vigorously defend against them.”

Stumpf was CEO of Wells Fargo from 2007 until he retired in October 2016 amid the crisis. A report the next year conducted by law firm Shearman & Sterling on behalf of Wells Fargo’s board alleged that he reacted too slowly to warnings of sales abuses across the bank’s branch network. He forfeited US$41 million in equity awards when he stepped down, and the board clawed back an additional US$28 million following the Shearman & Sterling report.

Stumpf “failed to respond to numerous warning signs, including many team member complaints submitted directly to his office regarding pervasive sales pressure, fear of termination for not meeting unreasonable sales goals, and illegal and unethical sales activity across the Community Bank,” according to the OCC order he signed this week.

Regulatory actions against Wells Fargo have also included billions of dollars in fines and legal costs, and an order giving the OCC the right to remove some of the bank’s leaders. The Department of Justice and the Securities and Exchange Commission also have been investigating the lender’s issues.

The OCC and the Fed have both cited a wide-ranging pattern of abuses and lapses at Wells Fargo. The OCC drew scrutiny of its own as the firm’s main regulator throughout the scandals, prompting an internal review at the agency.