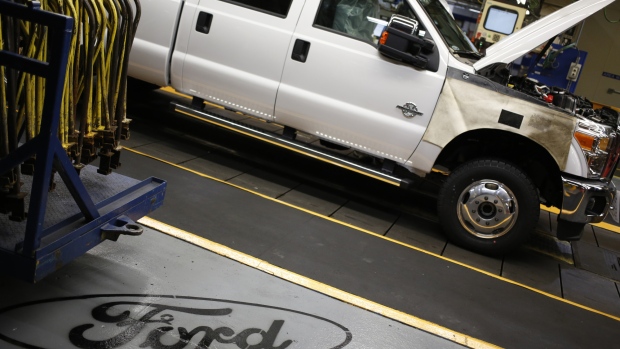 Ford Motor Co.’s long-awaited turnaround is starting to gain traction as high-profit trucks and deep cost cuts boost earnings and bolster its outlook for the year.

The automaker reported adjusted profit of 44 cents a share for the three months that ended in March, beating analysts’ average estimate of 26 cents. Automotive revenue slipped to US$37.2 billion on lower global deliveries to dealers, but exceeded the average projection of US$37 billion.

Chief Financial Officer Bob Shanks, who said in January there was “potential” for earnings improvement this year, told reporters Thursday he was more certain of that view. “I’ve dropped the ‘potential,’” he said at Ford headquarters in Dearborn, Michigan. “We were hopeful that we would be improving. I think you could say we have more confidence in that today.”

Ford shares surged as much as 6.1 per cent to US$9.97 shortly after the close of regular trading. The stock has climbed 23 per cent this year.

Ford’s results reinforce the case Chief Executive Officer Jim Hackett made earlier this month that the company is turning the corner in the midst of the US$11 billion overhaul he’s leading. The earnings beat was driven by strong results in Ford’s home market, where pretax profit margin rose nearly a point, to 8.7 per cent, on demand for lucrative trucks and SUVs including the F-Series pickup and Lincoln Navigator.

Hackett, 64, is trying to boost Ford’s bottom line by closing factories, cutting thousands of salaried jobs and ditching traditional sedans to focus on higher-profit sport utility vehicles and trucks. He’s also pouring billions into electric and self-driving cars and this week announced a US$500 million investment in battery-powered truck-maker Rivian.

While investors have voiced frustration with the deliberate approach Ford management has taken to transforming the company, the shares have risen as the carmaker introduces new and redesigned models, including the Escape SUV, and cuts jobs and closes plants in money-losing overseas markets. The stock gain still hasn’t made up for the 37 per cent plunge the shares took in 2018.

“Sentiment has improved, but there’s still some skepticism remaining,” said David Whiston, an analyst with Morningstar in Chicago, who rates Ford a buy. “The old, stale product lineup is getting close to being refreshed in the U.S. and recent disclosures of cuts in Europe and South America are appealing.”

Work still remains. Ford had pretax losses of US$128 million in China, compared with a loss of US$150 million a year ago. Ford’s sales in China plunged 36 per cent in the first three months of the year as it struggled with an aging lineup and slowing market. Its nascent mobility business segment -- responsible for costly self-driving vehicle development -- lost US$288 million.

Hackett last month named a new leader for Ford’s international operations, promoting Mark Ovenden, the head of its business in the Middle East and Africa, to that broader role. Ford also hired a new CFO in Tim Stone, a former Amazon.com Inc. and Snap Inc. executive, to be the first outsider to fill that critical role at Ford in 70 years.

“The hiring of Tim Stone from Amazon as CFO signals to Wall Street that Ford is serious about its transition to a new-age company,” David Kudla, chief investment strategist for Mainstay Capital Management, wrote in an emailed note.

North America continued to drive Ford’s profit, with earnings before interest and taxes of US$2.2 billion, up from US$1.9 billion a year earlier. Ford’s U.S. sales fell 1.6 per cent in the first quarter, a smaller decline than the drop at General Motors Co. and Fiat Chrysler Automobiles NV.

“It’s all about trucks,” Morningstar’s Whiston said of Ford’s top selling F-Series pickups, which continue to sell well even as GM and Fiat Chrysler have rolled out redesigned trucks. “That’s a testament to the strength of the F-Series franchise and bodes well for next year when you get a new generation truck.”