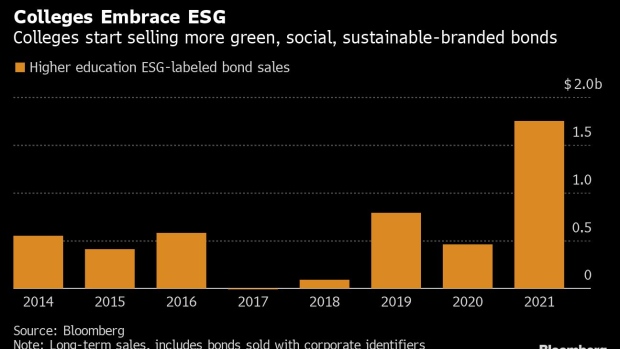 (Bloomberg) -- Eager to show their commitment to mitigate climate change, U.S. colleges are touting their efforts in the bond market with a trendy financing tool.

Schools last year floated almost four times as much debt branded with green, sustainability or social labels as the year before, taking advantage of the hunger from investors who want securities that signal their own interest in the environment.

Perennial builders and repairers of their mini cities, colleges are funding projects that will reduce their carbon footprint -- such as by converting a century-old energy system at Oberlin College. They’re also helping cut future emissions by expanding research space and a track to test electric-car charging at Utah State University. Common projects on many campuses are new buildings that adhere to greener standards than older facilities.

Sales of so-called ESG bonds -- for environmental, social and governance -- are an emerging trend in the municipal market, where states, cities and public entities like colleges and hospitals raise money to finance capital projects. In 2021, municipal borrowers sold more than $50 billion of green-, social- or sustainability-labeled debt, far and away a record, according to data compiled by Bloomberg. And while colleges and universities accounted for a $1.7 billion sliver, the sharp upward trajectory mirrors the broader market.

Such bonds can include an external review which attests to the benefits of the funded activities, and adhere to International Capital Markets Association principles or the Climate Bonds Initiative’s standards, which require outside-party verification. But green bonds don’t necessarily need to be verified -- issuers can simply claim the label and hope investors have faith.

The label represents the aspirations of colleges: to use social, financial, and educational capital to make the world a better place and improve their campuses, especially as infrastructure ages.

Ohio State University became an early entrant to the green-bond market when it borrowed $600 million in September for a new inpatient hospital in Columbus that promotes energy efficiency and conserves water.

The school will consider more green labels to lower the cost of future bonds, said Kurt Kauffman, assistant treasurer at the school.

“We think that benefit will grow over time as that ESG investor base matures,” Kauffman said. “It may be a small benefit now but bigger in the future.”

In the $4 trillion municipal-bond market, green-labeled bonds have funded mass-transit projects and clean water initiatives. Because the standards and disclosure accompanying such debt are inconsistent, not all environmentally friendly projects are branded as “green” and not all labeled debt adhere to the same criteria.

It’s difficult for investors to get the full picture because anyone can choose to self-label, said Alexa Gordon, head of ESG for the municipal fixed-income group at Goldman Sachs Asset Management.

“Until there’s consistency, it’s hard for issuers to have that incentive,” Gordon said.

Oberlin College, a liberal arts school about 35 miles (56 kilometers) southwest of Cleveland, essentially conducted its own price experiment in July when it sold debt with a climate-bond certification to convert its energy system to geothermal.

The school priced two bonds on the same day, with the same maturity and call structure. The $80.6 million green bond priced with a yield 90 basis points above the benchmark. The $30.4 million series, to refinance debt, priced with a spread of 95 basis points. Vice President for Finance Rebecca Vazquez-Skillings said the climate label gave the green bond a better price.

Treasurer Karen Kearney said it’s unclear whether the green label meant a lower borrowing cost because Stanford’s debt is already in high demand from buyers eager to invest in the AAA rated school. Still, she said the April sale drew bids from new ESG-focused investors who hadn’t bought the school’s debt before.

Stanford used the designation partly because of what’s going on in the structures -- research into inequities in health and affordable housing for students, faculty and staff in an expensive area.

Oberlin and Stanford both hired Kestrel Verifiers to ensure their projects meet sustainability goals, and they agreed to continue reporting on progress.

“It’s going to be the new normal,” said Melissa Winkler, a senior vice president at Kestrel.

Utah State used a different verifier for its project, which doesn’t shrink its campus carbon footprint, but will support research to reduce car emissions. Its debt is funding the expansion of a building that will help research car-charging systems at highway speeds, said Dave Cowley, vice president for business and finance.

Oberlin’s multi-year energy conversion will further its goal to become carbon neutral by 2025. President Carmen Twillie Ambar touts the effort at events with prospective students, saying that while construction can be inconvenient, it will make the campus better.

“I say you’re going to have to step over the sustainable infrastructure project,” she said. “It’s going to be here for four years.”