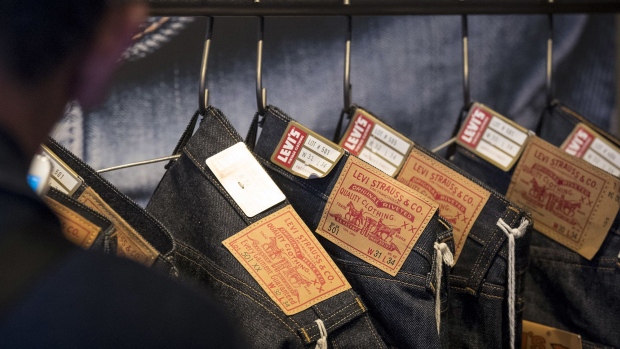 (Bloomberg) -- Levi Strauss & Co. reported quarterly revenue that exceeded expectations, suggesting fears of a denim slowdown were overblown amid strong momentum in the direct-to-consumer business and improving trends in Europe.

Revenue in the fiscal fourth quarter ended Nov. 27 was $1.59 billion, compared with the $1.57 billion average estimate of analysts surveyed by Bloomberg. Earnings of 34 cents a share, excluding some items, also exceeded analyst estimates.

Total inventories, meanwhile, were up 58% in the fourth quarter, compared with 43% when the company last reported results. Levi said it expects more normal inventory levels by the end of the second quarter of this year, and noted that two-thirds of inventory is in core products.

Ahead of the report, a handful of analysts downgraded their ratings of the jeans maker. They cited sinking demand for denim, particularly among younger shoppers, in favor of styles like cargo and twill pants. The better-than-forecast results suggest that phenomenon might be less serious than expected.

“The US denim category has been soft for the last six months or so but it’s basically a correction from the double-digit growth from the first six months of the 2022 calendar year,” Levi Chief Executive Officer Chip Bergh said in an interview. “And we are more than just denim — 40% of our revenue comes from non-denim products. The diversification of our business helps us weather any bumps in denim.”

Direct-to-consumer revenue, which makes up about 40% of the business and includes sales at Levi-branded stores and on the company website, fell 2% in the fourth quarter, while wholesale revenue fell 8%. Bergh noted that Levi’s Denizen and Signature brands, which are sold by Target Corp., Walmart Inc. and Amazon.com Inc., fell by double digits in the quarter.

“The lower-end consumer, even lower-middle are feeling the pinch from inflation,” Bergh said. “That consumer is making really hard budget choices right now. It’s challenging the lower end of the category overall.”

Gross margin was 55.8%, below the 57.8% reported a year ago and weaker than analyst estimates. Retailer margins have been strained in recent quarters by higher transportation costs, as well as increased promotions used to offload excess inventory that piled up last year.