Rosenberg on central bank policy: 'We are dancing on a pin here'

It would be hard for Tiff Macklem to imagine a worse economic backdrop to begin his seven-year term as Bank of Canada governor.

One quarter of the nation’s labour force is out of work after the coronavirus pandemic and an oil-price crash triggered the deepest recession in the postwar era. Tens of thousands of Canadian businesses will almost certainly close in the next several months, bringing lasting damage to an economy that was struggling even before the crisis, and is seen lagging the recovery in the U.S.

For Macklem, a career technocrat and most recently dean of the University of Toronto’s business school, that will mean testing the limits of debt accumulation in a country that -- with total government, corporate and household liabilities topping 300 per cent of gross domestic product -- is already one of the most-highly leveraged in the world.

To counter the slowdown, the new governor, who replaces Stephen Poloz on Wednesday, will keep financial conditions as loose as they’ve ever been in the central bank’s nine-decade history. Economists expect the central bank to leave the benchmark interest rate near zero for the foreseeable future, starting with a decision at 10 a.m. in Ottawa, and to keep the economy awash in cash.

The Bank of Canada has expanded its balance sheet to about 20 per cent of Canada’s GDP, up from about five per cent pre-crisis, with the purchase of $344 billion of government bonds and other assets. It’s a situation fraught with risk, but many see Macklem as uniquely qualified to deal with it.

“He’s got great common sense, he’s whip smart, he can frame ideas very clearly and has rock-solid judgment,” said Jean-Francois Perrault, chief economist at Bank of Nova Scotia, who worked with Macklem at the Bank of Canada and during his stint at the finance department in the financial crisis.

Macklem comes into the job with solid credentials as an economist, central banker, government official and business insider. He was a key architect of the global response to the financial crisis just over a decade ago, when he served as a top aide to then Finance Minister Jim Flaherty. Mark Carney, Bank of Canada governor during the crisis, recruited Macklem in 2010 as his second-in-command, a post he occupied until 2014 when he left to run the Rotman School of Management. 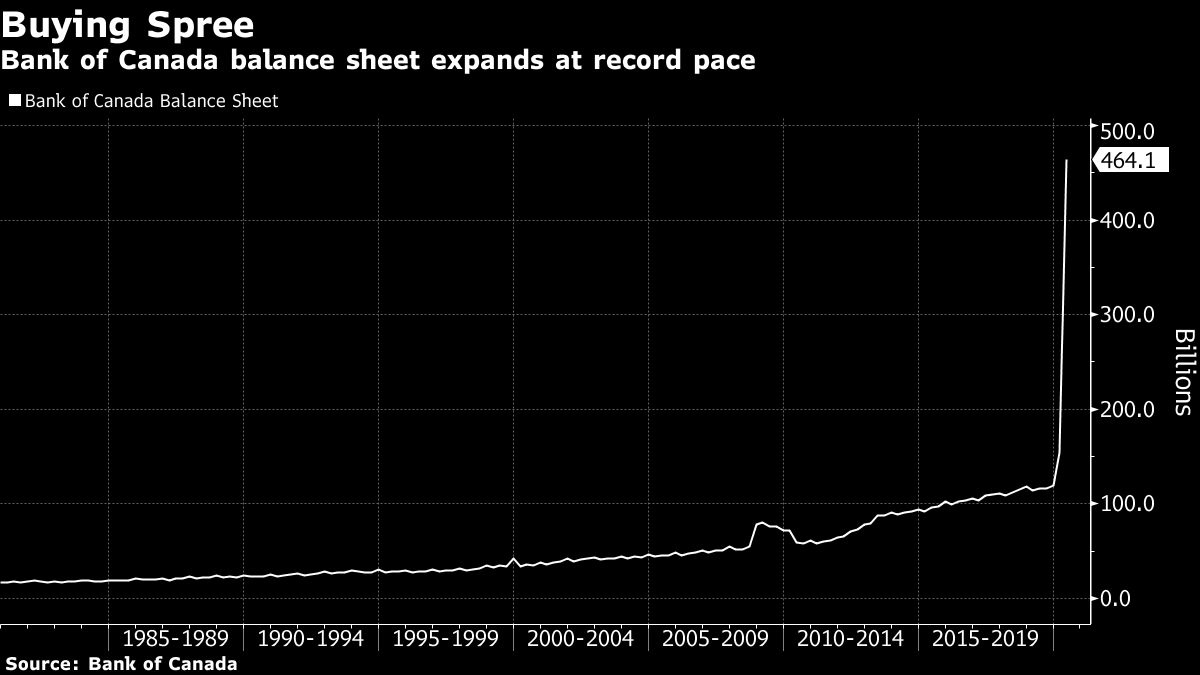 The new governor will need to draw on that breadth of experience to get to grips with the most pressing challenge: steering the economy out of its downturn while making sure the central bank doesn’t cede control of monetary policy as it finances the federal government’s massive emergency spending program.

“The most important thing is to at best maintain the central bank’s independence as far as that can be accomplished, and also not to be in the game of picking winners and losers,” David Rosenberg at Rosenberg Research & Associates Inc. said Tuesday on BNN Bloomberg.

An accomplished economist, Macklem worked his way up at the Bank of Canada through the 1990s before becoming chief of the research department in 2000. Former colleagues describe him as someone who shuns dogma and takes a pragmatic approach to policy, but who doesn’t stray far from conventional thinking.

For example, he advocated for a strong global fiscal response to the 2008-09 crisis, before quickly pivoting to support reining in deficits in the aftermath of that recession. He’s a staunch defender of the Bank of Canada’s two per cent inflation target, but has shown a willingness to be flexible should the situation require it.

At some point, he’ll need to decide when renewed inflationary pressure or concern about elevated debt make it too difficult to justify cheap money. That may be made more difficult as the federal government becomes increasingly reliant on the lender of last resort to finance its deficits.

Canadian general government budgets will end 2020 at near 12 per cent of GDP, from near balance before the crisis, according to the International Monetary Fund. No other major advanced economy tracked by the IMF will record a larger one-year fiscal swing.

This is where Macklem’s economics background may come in especially handy, as his “inner technocrat” helps him guide the Bank of Canada through the political minefield of government debt financing.

“He is of course a very analytical and evidence based guy and that’s just apparent in everything he did as dean and he’s going to bring that same outlook to the bank,” University of Toronto President Meric Gertler. “He’s going to be a fantastic steward of the Canadian economy.”