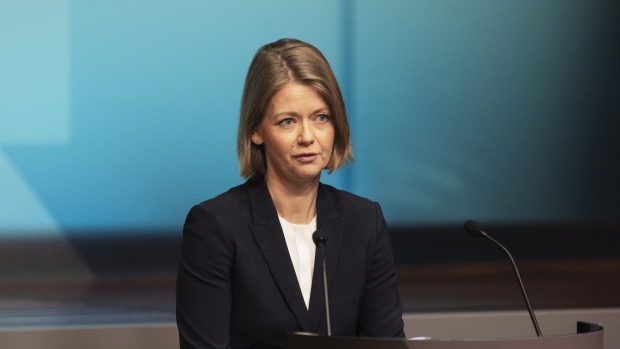 The updated policy-rate path of Norway’s central bank “is consistent with the policy rate being hiked by 25 basis points for the remaining meetings this year and then a further increase to 3% before summer next year,” she said in a phone interview from Oslo. “I will not exclude the possibility that larger steps will be warranted also going forward.”

Wolden Bache spoke after the policy makers unanimously decided to lift the benchmark deposit rate by 50 basis points to 1.25% on Thursday -- its biggest increase in borrowing costs in two decades -- and pledged accelerated tightening to stamp out surging inflation.

The expansion of Norway’s mainland economy will probably slow to 3.5% this year from 4.2% in 2021, and to 1.1% next year, the central bank forecast on Thursday. That compares with its March forecasts of 4.1% and 1.6%, respectively.

Uncertainty about the outlook includes the risk of “a more abrupt slowdown internationally but also that higher interest rates in Norway might lead to a more pronounced slowdown in the housing market and in household consumption,” according to Wolden Bache.

On the other hand, “there is a risk that international price pressures will remain, and on top of that the risk of weaker krone might also imply a risk that inflation will be higher than we forecast,” she said.