Royal Bank of Canada's profit climbed 10 per cent in the latest quarter as record performance in its capital markets division and a drop in loan-loss provisions powered gains at the country's largest financial institution.

Net income for the three-month period ending Jan. 31, representing the fiscal first quarter, reached $3.85 billion, compared to $3.51 billion a year earlier and $3.25 billion in RBC's prior quarter. On an adjusted basis, the bank earned $2.69 per share. Analysts, on average, were expecting $2.28 in per-share profit.

RBC's core personal and commercial (P&C) banking operations delivered the lion's share of profit, as net income rose six per cent year-over-year to $1.79 billion and deposit and loan volumes rose. Mortgage demand was evident in the period as low rates spurred housing-related activity. RBC’s Canadian residential mortgage book had an average balance of $305.1 billion in the fiscal first quarter, compared to $293 billion in the previous quarter and $271.8 billion a year earlier.

“Mortgage growth of 12 per cent year-over-year continues to lead the pack by a wide margin but other loan categories remain very sluggish. While this puts pressure on results in the short run, it is clearly a sign of the strength of the franchise and suggests to us upside potential once the post-pandemic recovery really gets going,” wrote Scotia Capital Analyst Meny Grauman in a report to clients on Wednesday. 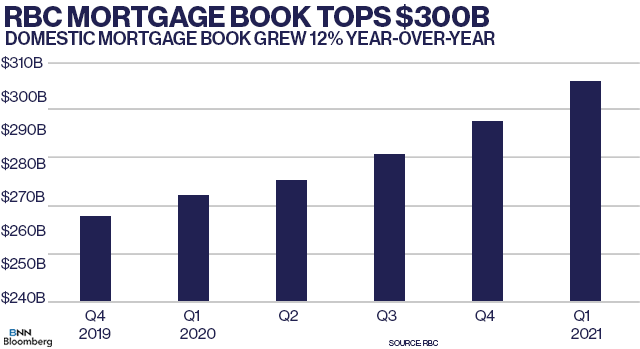 "Against the uncertain macroeconomic backdrop due to the COVID-19 pandemic, we entered 2021 with strong momentum across our businesses. This is a reflection of the resiliency of our diversified business model, prudent approach to risk management, significant technology investments, and our colleagues' dedication to our clients and communities," said RBC Chief Executive Officer Dave McKay in a release.

It was the bank's trading operations that really stood out, as profit from capital markets activity surged 21 per cent to a new record of $1.07 billion. RBC noted the gains were driven in large part by equity trading activity in the United States.

As with Bank of Montreal and Bank of Nova Scotia on Tuesday, RBC's results on Wednesday also benefitted from improved credit quality. Provisions for credit losses in the fiscal first quarter fell to $110 million from $427 million in the previous quarter.

However, Grauman noted that investors may have anticipated an even larger profit beat from RBC after BMO and Scotia set the bar. Investors would have also been looking for RBC’s performance to be less dependent on credit metrics, he added.

“It is hard to call an 18-per-cent beat to the Street disappointing and so we won’t. That said, we do believe that after some even larger beats [Tuesday] expectations were building for RBC to deliver an even more impressive result,” he wrote.