Canadian banks fell about 20 per cent from their record high set in early February as recession fears send investors fleeing.

The S&P/TSX Commercial Banks Index, which tracks the country’s eight largest lenders, dropped Thursday, adding to another day of losses after inflation in Canada surged to a four-decade high and US data pointed to rising unemployment and slumping manufacturing and services activity.

Toronto-Dominion Bank, Canada’s second-largest lender, led losses as it dropped 3.3 per cent to its lowest point in nearly nine months. Canadian Imperial Bank of Commerce and Bank of Nova Scotia each fell about 3 per cent.

The commercial banks index hit its high on Feb. 8 and was one of the S&P TSX Composite Index’s strongest performers before spiraling as Russia launched its war in Ukraine on Feb. 24 and central banks warned of a potential economic downturn. 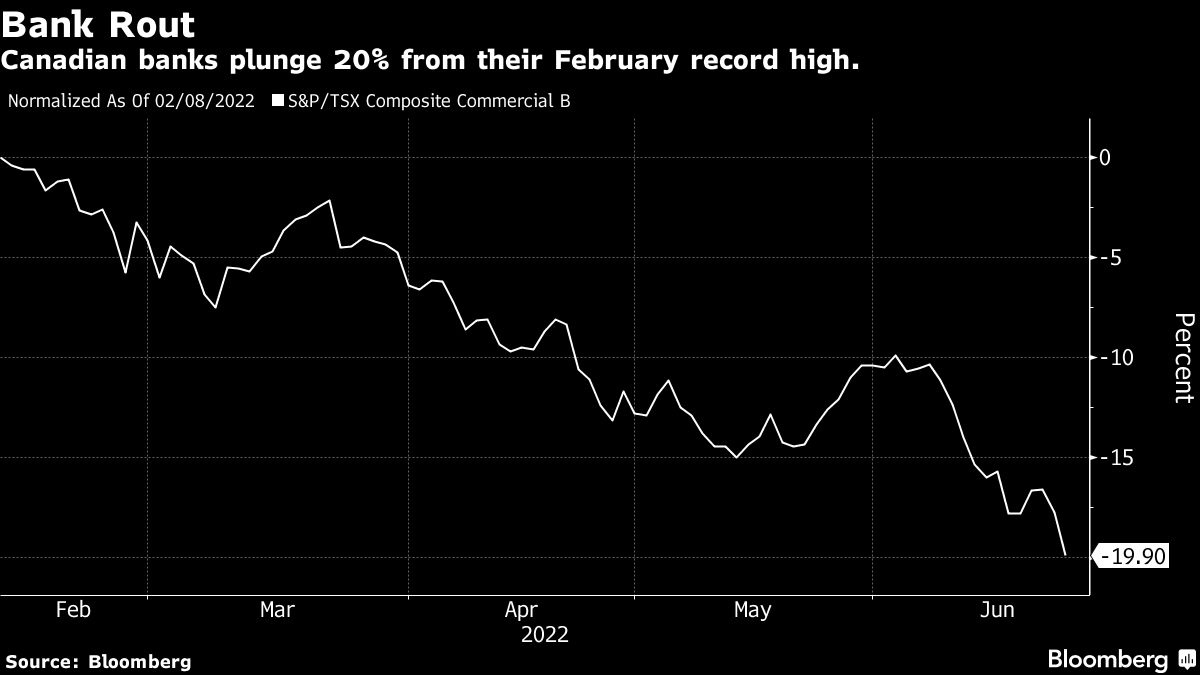 Analysts are warning that profits may not be as strong going forward. Canadian bank earnings estimates for 2023 could fall by 16 per cent on average in the case of an economic downturn, according the RBC Capital Markets. Scotiabank and CIBC are among the Big Six bank stocks leading losses this year. Both banks, Canada’s third- and fifth-largest banks, could have further to fall as they rebuild loan loss provisions previously released as pandemic restrictions unwound earlier this year.

Scotiabank’s core earnings per share for 2023 could decline the most out of the group by 22.5 per cent, RBC analyst Darko Mihelic said in a note to clients Tuesday. The bank has released the most performing reserves of the group, while Bank of Montreal and National Bank of Canada would be the least impacted, with each bank’s core EPS estimates falling by 12.6 per cent.

“NA and BMO would be good defensive stocks to own heading into a recession,” Mihelic said. “BNS and CM would likely suffer under bigger earnings declines and some consternation around housing in Canada and generally higher loan loss concerns.”

Inflation in Canada climbed to 7.7 per cent in May, reaching its highest point in 40 years, Statistics Canada said on Wednesday. The jump bolsters expectations that the Bank of Canada will deliver aggressive rate increases next month.

Even so, Canada’s banking regulator left a key capital requirement for large lenders unchanged on Wednesday, indicating that it believes that the banks can absorb potential losses even as economic risks mount.

Investors prefer banks that get a head start on building up their reserves, Mihelic said.

“The banks that begin to proactively build reserves ahead of peers will be rewarded as long as there are not bank specific issues causing the reserve build,” he said.

As recession fears mount and Canada’s housing market cools, analysts including those at Barclays and Desjardins, have been cutting their price targets on the country’s largest lenders. Since early March 4, the average price target on the commercial banks index fell 6.3 per cent, with CIBC’s target dropping 9.7 per cent.