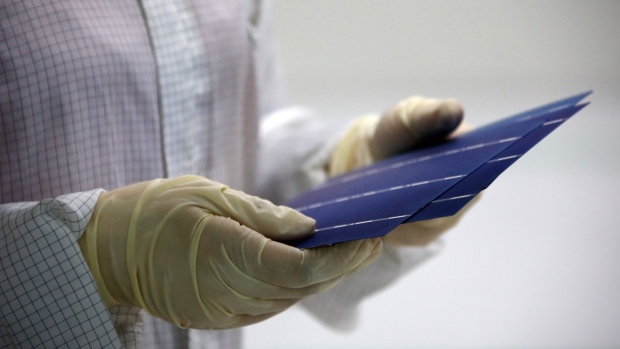 (Bloomberg) -- New US powers to detain imports tied to China’s Xinjiang region have been used to halt products from a major solar company, according to a key industry analyst.

US Customs and Border Protection detained products from the manufacturer and required documentation to detail the source of quartzite, a raw material in the firm’s supply chain, Roth Capital Partners analysts including Philip Shen said in a June 28 research note, without naming the company impacted.

Providing evidence about the source of their raw materials marks an escalation in controls applied to manufacturers to prove their supply chains are free of links to alleged labor abuses in Xinjiang. Quartzite is a silicon-heavy sand or rock that’s purified into the ultra-conductive polysilicon that solar panels are made from.

When reached for comment, a US Customs spokesman said he didn’t have details yet on specific cases and referred to agency comments from a June 17 press call that outlined “proactive” steps to communicate with industry and stakeholders.

The agency said in June 13 guidance to importers that under the new Uyghur Forced Labor Prevention Act they should provide a flow chart mapping the origin of each material in the supply chain including the quartzite.

“Our checks suggest that while this can be solved, it is non-trivial and could take time,” for companies to be able to provide necessary evidence, the Roth analysts said. “We see this as an incremental negative for the US solar industry.” The US relies heavily on imports from Chinese manufacturers.

Read more: Why China and US Disagree on Forced Labor in Xinjiang: QuickTake

The US and allies have sanctioned individuals and entities with ties to Xinjiang and curbed some imports on concerns over human rights breaches and the alleged use of forced labor in the region. China has repeatedly denied the accusations and Foreign Ministry spokesman Zhao Lijian previously called them “the lie of the century.”

On June 21, the US brought the forced labor act into effect, banning imports of products from Xinjiang unless it can be proved that they weren’t made with forced labor.

Focusing on the source of quartzite means the US is moving one step further up the supply chain than its previous crackdown on Xinjiang products. A ban enforced last year under a separate policy targeted Hoshine Silicon Industry Co., the world’s largest silicon metal producer, which operates two facilities in Xinjiang.