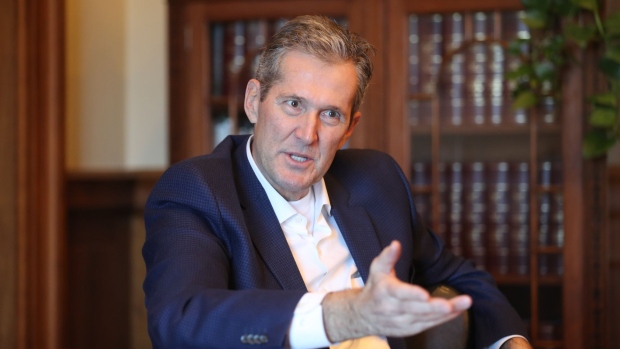 Manitoba is asking the federal government to create an emergency credit agency to allow provinces to borrow money more cheaply to fight the coronavirus pandemic.

The Canadian province of 1.4 million people may need to borrow $10 billion by the end of the year because of the coronavirus crisis, Premier Brian Pallister said Thursday at a press conference. The federal government can borrow money at rates at least one percentage point lower than Manitoba and should create a centralized borrowing agency to help provinces borrow as deficits grow, he said.

“The revenues that governments need to support things like health care are starting to dry up,” Pallister said. “What we need to be able to do is get credit and borrow money to fill in that gap.” The province is postponing its plan to lower the sales tax rate to 6% this year.

Pallister’s call echoes the views of experts who say government credit facilities are needed to help the country limit the damage of the crisis. Credit guaranteed by the government could be made available to businesses through federal and provincially-regulated institutions or crown agencies like the Business Development Bank of Canada or Farm Credit Canada, a group sponsored by the C.D. Howe Institute said Wednesday in a report.

As of Thursday morning, Canada had 3,555 confirmed cases of the virus with 35 deaths.

The need for provinces to borrow additional money is “enormous” and Manitoba’s rainy day fund could be depleted in less than three months, possibly faster, depending on how things deteriorate, Pallister said. The issue has been raised with Prime Minister Justin Trudeau and other provinces, he said.

“I think we all know we’ve got a monumental challenge,” Pallister said.