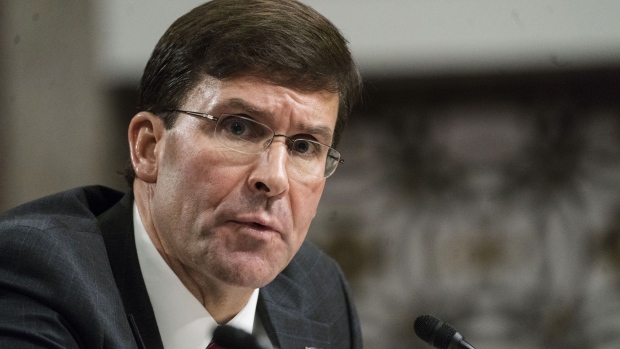 Mark Esper, secretary of defense nominee for U.S. President Donald Trump, testifies during a Senate Armed Services Committee confirmation hearing on Capitol Hill in Washington, D.C., U.S., on Tuesday, July 16, 2019. Esper's confirmation as secretary of defense is a matter of urgency after almost seven months with an acting leader at the Pentagon, the top Republican and Democrat on the Senate Armed Services Committee said at the hearing. Photographer: Sarah Silbiger/Bloomberg , Bloomberg

(Bloomberg) -- President Donald Trump has assailed the biggest Pentagon technology contract in years, citing the objections of rivals who say it’s all but rigged to favor Amazon.com Inc. That’s leaving Mark Esper, his new defense secretary, with a thankless list of options.

His choices include canceling the cloud-computing contract valued at as much as $10 billion over 10 years, reopening it to revise its complex terms or staying the course despite the criticism. Whatever choice he makes is likely to draw fresh criticism over a project that has pitted Amazon against tech rivals led by Oracle Corp.

Esper has opened his own review of the pending contract known as as the Joint Enterprise Defense Infrastructure program, or JEDI. He’s said he’d take the same action for any contract that attracted so much “consternation,” including from members of Congress.

He said “I’ve heard from people from the White House” but emphasized he wasn’t ordered to reconsider the project by Trump, who said last month “I’m getting tremendous complaints about the contract with the Pentagon and Amazon.”

Here’s a look at the options Esper will confront whenever he completes his review:

Cancel the contract that Amazon or Microsoft are in line to win:

It’s not unusual for a new defense secretary to take a fresh look at projects. Donald Rumsfeld canceled the Crusader self-propelled howitzer in May 2002, and Defense Secretary Robert Gates canceled or curtailed scores of weapons programs in April 2009. But those cases involved well-established programs, not cancellation in the middle of a formal competition.

What makes Esper’s review of JEDI different “is that in the past, the secretary of defense was normally following his staff’s recommendations,” said Thomas Spoehr, director of the Center for National Defense at the Heritage Foundation. In this case, “the Pentagon was solidly lined up in favor of the program and the SecDef appears to be responding to a presidential direction to review.”

Still any federal agency can call off a competition up until the award date. That would be a big setback for Amazon, the No. 1 cloud services provider, and Microsoft Corp., the only other survivor of strict contract requirements that ruled out competitors including Oracle and International Business Machines Corp.

Amazon and Microsoft could lodge a protest with the Government Accountability Office or file a lawsuit arguing that the cancellation was arbitrary and capricious -- and tainted by political interference, said Frank Murray, a procurement lawyer and partner with Foley & Lardner LLP. But Murray said such arguments are “are tough to show” in court, especially if the Pentagon can establish a written record supporting its decision.

Canceling the project wouldn’t solve the Pentagon’s technology challenges. Pentagon officials --including Esper -- have said that it’s essential the Defense Department take advantage of cloud computing to embrace new technical capabilities such as artificial intelligence and machine learning. The department could expand existing cloud programs and initiate new ones less ambitious than the far-reaching JEDI project.

Change the contract so that rivals can get back in the game:

The Defense Department could modify the winner-take-all JEDI procurement to split it among multiple companies -- as Oracle and others urged from the start -- or change the selection criteria for picking a winner.

One scenario is that the Pentagon would broaden the criteria it uses to pick a winner without changing the basic military goals for the project, such as the requirements for storage capacity and security.

In that case the Defense Department would probably reopen the bidding and call for new proposals, postponing the award, said David Berteau, president of the defense industry’s Professional Services Council and a former Pentagon assistant secretary for logistics and material readiness.

“The review could delay award by as little as one month -- if requirements stay ‘as-is’ and single-award remains the strategy -- or by as long as a year or more -- if requirements change and a new solicitation is required,” Berteau said.

Stay the course and make the award despite criticism:

After Esper reviews the cloud contract, he could stick with the existing plan at the risk of attacks from Trump and from Oracle’s allies in Congress.

Pentagon officials have argued the process has been fair, the project is crucial and that splitting it among multiple vendors would slow it down and make it harder to keep data secure.

If Esper stays the course, he could find ways to allay -- or at least acknowledge -- concerns. For instance, he could direct that a study be conducted to prevent the appearance of vendor favoritism in future bids, said Stan Soloway, a strategic consultant and former deputy undersecretary of defense.

Esper also could emphasize that the immediate decision isn’t for all of the potential $10 billion, pledging a review at every step of the way on the winner’s performance and potential alternatives. The winning company is guaranteed about $1 million for the initial two years, with options following that could bring the total to the $10 billion price tag.

“DOD can take it as fast or slow as it would like,” said Andrew Hunter, a defense industry analyst with the Center for Strategic and International Studies. The Pentagon “can also limit it after contract award if it is dissatisfied with the level of service or sees greater competition developing over time.”

Oracle, which has mounted an extensive legal and lobbying campaign, has been rebuffed so far by the Pentagon, the Government Accountability Office and a federal claims court judge in arguing that the project was fatally tainted by revolving-door conflicts of interest involving people who worked at times for the Pentagon and Amazon.

Still, the Defense Department’s inspector general is working on its own report on the conflict of interest questions, but it may not be done soon enough for Esper to draw on it in making his decision.

To contact the editors responsible for this story: Sara Forden at sforden@bloomberg.net, Larry Liebert