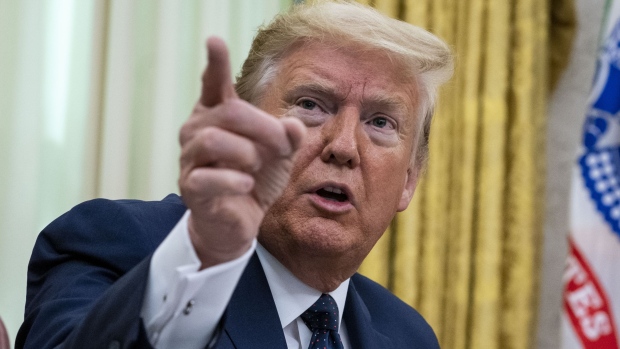 As President Donald Trump lashes out at Twitter Inc. for allegedly infringing his free speech, the company is saying the same about his administration’s screening of social media accounts of foreign visitors and immigrants to the U.S.

Twitter and Reddit Inc. joined the Internet Association, an industry group, in a brief submitted Thursday in support of a lawsuit challenging the requirement that applicants for U.S. visas register their social media accounts. The lawsuit was filed in December in federal court in Washington by the Brennan Center for Justice and the Knight First Amendment Institute on behalf of a group of documentary filmmakers.

Since May 2019, the State Department has required most visa applicants to register every social media handle they’ve used over the past five years on more than a dozen platforms, including Facebook, Instagram, Twitter and YouTube. The lawsuit alleges the policy violates applicants’ free-speech rights by subjecting their online speech and associations to scrutiny.

State and the Department of Homeland Security, the named defendants in the case, did not immediately respond to requests for comment.

The companies’ brief comes amid an intensifying war between the president and Twitter in particular. Trump’s favorite social media platform has begun fact-checking his posts and on Friday slapped a warning on one of his tweets about the Minneapolis riots, saying it violated its rules against promoting violence.

Trump claims he is being censored and has struck back with an executive order intended to lift some of the legal protections social media sites have regarding user-generated content.

Twitter, Reddit and the Internet Association said in their brief in the visa-applicant case that the registration policy harms those who use online aliases to more freely discuss controversial, political or sensitive issues.

“Many speakers use internet forums like Reddit and Twitter to make statements that might provoke criticism or retaliation from their communities,” the companies argued in the brief. “Some employ anonymous Twitter accounts to convey disfavored political views or other information that could expose them to social stigma or loss of employment.”