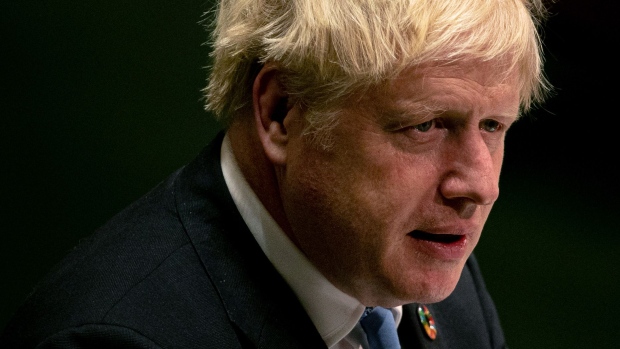 U.K. Prime Minister Boris Johnson pledged to reopen England’s stores and outdoor hospitality from mid-April, as he set out his aim to fully restart the economy from June 21.

In a statement to Parliament, Johnson set out four steps to carefully reopen the country after its lockdown, warning there would need to be at least five weeks between each to judge the impact on infections and deaths.

“The threat remains substantial,” said Johnson. “It is so crucial that this road map should be cautious, but also irreversible. The end is in sight and a wretched year will give way to a spring and summer that is very different and incomparably better to the picture we see today.’

Johnson is already facing pressure to move faster, after the economy endured its worst recession in more than 300 years. Government guidance asking people to work from home where possible will remain in place for another four months, and the request will be examined as part of a review of social distancing measures.

The relaxation of England’s third national lockdown will begin with schools returning for all pupils on March 8, followed by outdoor gatherings of either six people or two households outdoors from March 29.

From April 12 at the earliest, large sectors of the economy could reopen: non-essential shops, hairdressers and nail salons, outdoor attractions including zoos and theme parks, indoor gyms and swimming pools, and hospitality for outdoor service. Self-catered holiday accommodation would also open at this point.

From May 17 at the earliest, indoor hospitality and hotels reopen, as well as entertainment venues such as cinemas and children’s play areas. International travel could also resume from this date, although this remains subject to a government review.

June 21 is the earliest date by which all limits on social contact can be lifted and the final sectors of the economy, such as nightclubs, could reopen. Each move will be taken uniformly across England.

But four tests must be met before the government can move onto each step. These are:

Johnson also announced four reviews, including into whether proof of vaccines or negative tests could help people gain access to venues or workplaces. Separately, pilot tests will start in April to look at whether events can be run with larger crowd sizes and reduced social distancing.

A taskforce will be set up to explore how to facilitate greater inbound and outbound travel while still managing the risk of variants, and there will be a review of social distancing measures such as face coverings.

England has been under lockdown since early January, with schools closed and shops, pubs and restaurants shuttered. With cases and deaths now falling rapidly, an influential group of Conservative backbenchers wants to see all restrictions lifted by the end of April.

That pressure is mounting amid falling case numbers and a significant acceleration of the U.K.’s vaccination program, with all adults to be offered a shot by the end of July and everyone over 50 by mid-April.

One in three adults -- more than 17.5 million people -- have had a vaccine as of Sunday. Health authorities reported 9,834 new cases on Sunday, down from the peak week in January when cases averaged almost 60,000 a day.