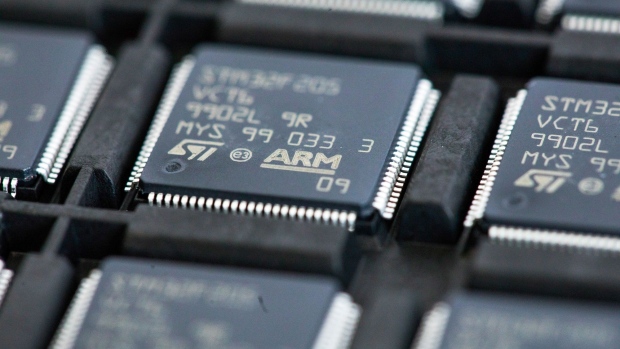 (Bloomberg) -- As the UK government’s hopes for homegrown chip giant Arm to list in London dim, local investors may still be able to own a slice of the Cambridge-based firm

Even if Arm picks the US for a listing, the British public could buy shares in the chip designer through a retail offer, according to PrimaryBid, a firm that specializes in such offers.

PrimaryBid has presented the idea to ministers, having previously organized a similar arrangement alongside the US listing of the owner of luxury members’ clubs Soho House in 2021.

“UK retail investors want and deserve access to Arm’s IPO,” Anand Sambasivan, chief executive officer of PrimaryBid, told Bloomberg News. “A London listing would be ideal, but there’s no reason the British public should miss out.”

Arm and the UK Treasury declined to comment. A representative for SoftBank didn’t respond to a request for comment.

Arm owner SoftBank Group Corp. — which is also PrimaryBid’s largest shareholder — intends to put the unit back on the market and was targeting a valuation of at least $60 billion in March. The UK firm is central to the chip industry with its processor designs powering about 95% of mobile devices, according to its website.

Prime Minister Rishi Sunak, who in December spoke to Arm’s CEO Rene Haas and SoftBank founder Masayoshi Son, has been lobbying for an Arm listing in London as well as the US, the Financial Times reported.

That effort has focused on making the case for a dual primary listing — a boost for the City of London’s post-Brexit ambitions. That would give Arm access to FTSE indices, boosting liquidity in its shares, but Son has said his focus is to take Arm public in the US because of its deep investor base and attractive valuations. The process has been delayed due to uncertainty in global markets.

The PrimaryBid proposal could leave the UK with the consolation prize of a UK retail offer alongside a US listing. That would enable people to buy shares in the country where Arm has roots as Acorn Computers in 1970s Cambridge.

It could also help promote a government push to attract people’s savings into tech companies with an aim of boosting their returns and helping growth sectors. Top executives at trading platforms AJ Bell Plc, Hargreaves Lansdown and Interactive Investor Ltd. have been urging UK companies to open up their IPOs to retail buyers as the government works on various capital market reforms.

A full UK listing of Arm would be a “major coup,” according to Steven Fine, chief executive officer of City of London broker Peel Hunt. Whatever the final plan, “we also believe there would be significant retail demand,” he said.

PrimaryBid estimates there could be £3 billion ($3.7 billion) of demand from ordinary investors in Arm, which had a substantial following among private investors when it was previously listed in the UK.

A 2021 transaction by Soho House owner Membership Collective Group Inc. could offer legal and technological precedent. The business bridged its NYSE listing to London to make shares available to retail investors, requiring the UK’s Financial Conduct Authority to approve the US prospectus. PrimaryBid worked on the transaction and has shared its legal playbook with interested parties.

A similar approach could be taken with Arm. A UK wrapper could be added to a registration document for America’s Securities and Exchange Commission. If the FCA approves that, it would become legal to sell Arm securities in the UK.

“Our preference would be for SoftBank to pursue a secondary listing at least for Arm in London,” Russ Shaw, founder of industry body Tech London Advocates, said. “In the absence of that, giving retail investors a chance at least to participate in the NY IPO would be a positive.”

There would be “a different degree of investor interest, appeal and appetite” from the widely-known Soho House brand, Shaw said, and also the flotation of food delivery app Deliveroo, whose 2021 IPO was considered a debacle.

Deliveroo’s listing highlighted a downside of retail offers. The business was one of the first large issuers in London to make room in its initial share sale for retail investors, and partnered with PrimaryBid on a £50 million community offering, which was open to customers on its app.

But trading restrictions in the immediate aftermath of the IPO meant retail shareholders were forced to sit on the sidelines as shares tumbled in its first week on the public markets, locking them into losses.

Even if PrimaryBid’s pitch comes off, there remains plenty to do to repair the UK’s international reputation as open for business after Brexit, according to Paul Drechsler, former president of the Confederation of British Industry.

“Everyone used to want to come in from students to old people,” he said. “Now where are we?”

--With assistance from William Shaw.