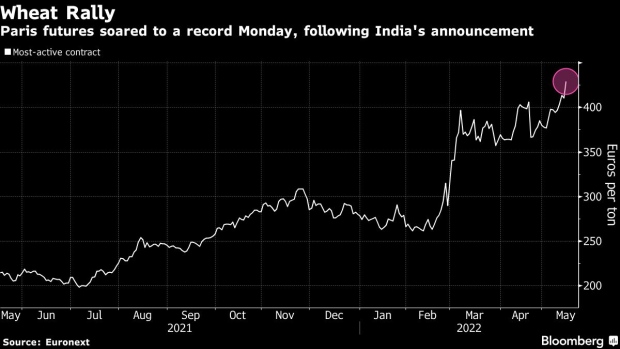 Workers unload wheat sacks from a truck at a Punjab Grains Procurement Corp. facility in the Ludhiana district of Punjab, India, on Sunday, May 1, 2022. A blistering heat wave has scorched what fields in India, reducing yields in the second-biggest grower and damping expectations for exports that the world is relying on to alleviate a global shortage. , Bloomberg

“The war is having an impact beyond Ukraine and it’s something that we’re very concerned about,” she said in Warsaw on Monday. “I’m afraid we really have a global crisis on our hands.”

On Monday, wheat jumped by the exchange limit to near a record high after India’s move to restrict exports, exposing just how tight global supplies are amid the conflict in Ukraine. Group of Seven agricultural ministers nations criticized the move for making the world’s crisis worse.

Yellen is in Europe to attend the G-7 meeting of finance ministers and central bankers in Germany later this week. She said that officials will release an action plan to address food insecurity. It “will include the ways in which you’re stepping up to provide surge support,” she said.

“I’d like to recognize the efforts the Polish government and other neighboring governments are making to help Ukraine develop roots for its agricultural exports, for wheat, for commodities, that global markets desperately need and are very hard to export because of the blockades of Odesa and other ports,” she added.

The US has pledged $40 billion in aid for Ukraine and $5 billion for food security “that’s making it’s way through the Senate,” Yellen said. “We want to make sure that the assistance gets to where it’s needed.”