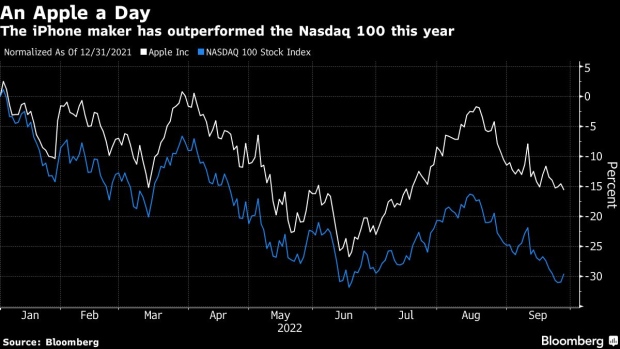 (Bloomberg) -- Apple Inc. shares buckled after a rare analyst downgrade exacerbated another wave of selling pressure that wiped out hundreds of billions of dollars in market value from the largest US technology stocks.

The iPhone maker dropped 4.9% after Bank of America cut its rating to neutral from buy, warning of weaker consumer demand for its popular devices. The selloff erased roughly $120 billion from Apple’s market capitalization.

There were few places to hide on Thursday with investors dumping stocks as Federal Reserve officials continue to talk tough on raising interest rates in the central bank’s fight against inflation. There were just three gainers in the Nasdaq 100 Stock Index, which fell 2.9% and within spitting distance of its June 16 low. Amazon.com Inc. and Alphabet Inc. fell nearly 3%, while Microsoft Corp. dropped 1.5%.

Apple has been treated as a haven for much of this year, outperforming fellow mega-caps and the broader tech gauge amid a steep selloff driven by recession fears. The world’s most valuable company with a market value of nearly $2.3 trillion has now fallen about 20% in 2022, compared to a 32% decline for the Nasdaq 100.

With consumer spending expected to cool across regions, BofA analysts led by Wamsi Mohan said demand for Apple’s services has already slowed and product demand is likely to follow. Pressure from a stronger dollar will only add to its woes, they said.

The Nasdaq 100 is on pace for its longest streak of quarterly declines in 20 years, yet investors are still bracing for more pain as the Federal Reserve aggressively raises interest rates and Wall Street analysts begin cutting profit estimates.

Estimates for 2023 profit growth for tech companies in the S&P 500 have declined about 6 percentage points since the start of 2022, compared with a drop of 4 percentage points for the broader index, according to data compiled by Bloomberg Intelligence.