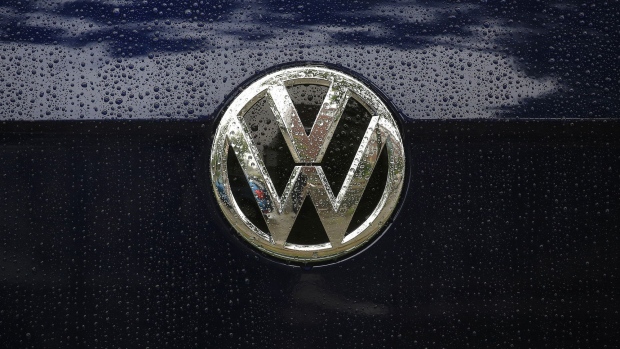 Raindrops rest on the badge of a used Volkswagen Golf automobile outside a Volkswagen AG (VW) showroom in Berlin, Germany, on Wednesday, July 26, 2017. Carmakers' shares have dropped since Spiegel magazine reported Friday that Daimler and Volkswagen informed authorities last year of discussions they'd had since the 1990s that also included BMW AG. , Bloomberg

BMW AG now has its own electric sports utility vehicle to take on the likes of Tesla Inc.’s Model Y and Daimler AG’s Mercedes-Benz EQC.

The Munich-based company unveiled the iX3, a variant of the mid-size X3 and its first battery-powered SUV, via an online news conference on Tuesday. The model will sell from about 68,000 euros (US$77,000) in Germany.

Built in China, the car comes with an electronically-controlled top speed of 180 kilometers per hour (112 mph) and a 286-mile range. It represents the start of BMW’s most serious push into electric cars since the i3 debuted seven years ago.

The iX3 “is perfect for every distance,” BMW Chief Executive Officer Oliver Zipse said during the event.

BMW was an early entrant into electric mobility with the i3, but fell behind the likes of Tesla and Volkswagen AG, which have since pushed more aggressively into the market. Automakers trying to electrify their fleets are now slashing costs after the coronavirus pandemic caused one of the worst sales slumps ever.

Zipse’s guiding philosophy has been to make all types of cars, from gasoline to electric, on the same production platform, which he says lets the company react more quickly to consumer demand.

The iX3’s starting price puts it just below the electric EQC, which sells from 69,500 euros. Tesla’s Model Y starts at 58,600 euros in Germany.

The iX3, which will start selling late 2020, will be followed next year by the company’s flagship iNext SUV and the i4 sedan. The company will also make an electric version of its top-end 7-series car, though it has not said when that model will come out.