Buying a home in the Canadian market has never been so unaffordable, as surging interest rates continue to drive ownership costs to record-high levels, according to Robert Hogue, assistant chief economist at RBC Economics.

“The Bank of Canada’s rate hiking campaign since March has added hundreds of dollars to mortgage payments that come with a home purchase,” Hogue said in a report to clients Thursday.

“This, along with the jump in property values during the pandemic have made it more difficult than ever to become a homeowner in Canada.”

Hogue added that the “impact of higher mortgage rates has yet to fully run its course.”

“We expect increases to date, as well as further upcoming Bank of Canada hikes will intensify upward pressure on ownership costs over the second half of this year.” 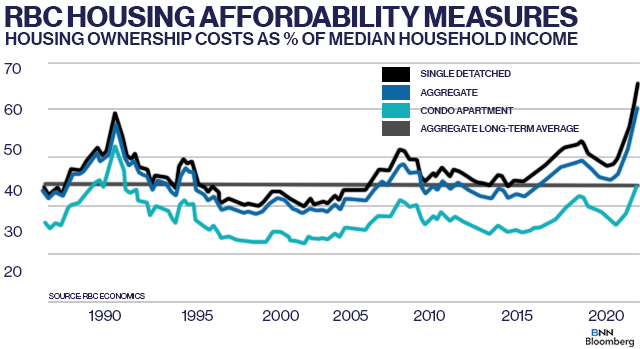 The report found the average Canadian household is spending 60 per cent of their income on ownership costs, which surpassed the previous high of 57 per cent in 1990.

British Columbia and Ontario top the list for being the most unaffordable markets in Canada, followed by Quebec and Nova Scotia.

The report found aggregate affordability hit record-high territory in Victoria (67.6 per cent), Vancouver (90.2 per cent) and Toronto (83.0 per cent) in the second quarter.

Smaller markets in Ontario, like Hamilton, London and Windsor, also “reached their worst affordability levels ever based on the ratio of mortgage carrying costs to household income.”

“The spike in interest rates since March—the policy rate is up 300 basis points to date with another 75 basis points on the way by year-end in our opinion—is raising ownership costs in every corner of the country,” Hogue said.

“Most affected are expensive markets where affordability was already stretched before the Bank of Canada launched its attack on decades-high inflation.”

GOOD NEWS ON THE HORIZON

Hogue said he thinks the widespread market downturn will cause some future improvements to affordability.

He thinks prices will continue to soften until they reach a bottom in the spring next year, adding that ownership costs will fall once the Bank of Canada stabilizes interest rates.

“Our view is unaffordability will peak at the end of this year—though the timing is poised to vary market by market,” Hogue said.

“Growing household income will partly drive the improvement that will follow. It will likely take years to fully reverse the tremendous deterioration that took place since 2021.”