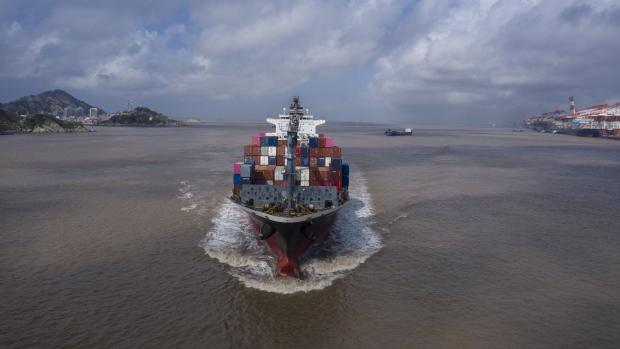 The container ship NYK Daniella sails out of the Yangshan Deepwater Port in Shanghai, China, on Saturday, Oct. 9, 2021. China's trade figures are scheduled to be released on Oct. 13. Photographer: Qilai Shen/Bloomberg , Bloomberg

(Bloomberg) -- Canada is proposing to change its foreign investment law, creating new powers for a cabinet minister to impose conditions on deals to protect national security.

The new legislation was promised in the government’s release of its Indo-Pacific strategy in November. It’s part of a broader government effort to guard Canada’s critical minerals industry and other sectors from Chinese state-owned firms.

The changes create a new obligation for foreign investors to give the government more notice for proposed investments in certain sectors. The industry minister will be given the authority to place conditions before closing — such as limiting a foreign entity’s access to intellectual property or trade secrets.

The amendments also increase the penalties on companies for non-compliance with the law from C$10,000 to C$25,000 ($18,300) per day, per infraction, and allow for a discretionary penalty of C$500,000 or more for failure to make a so-called “pre-implementation filing.”

The legislation doesn’t identify countries, but the updates are part of Canada’s new policy approach toward China, which Prime Minister Justin Trudeau’s government has described as an “increasingly disruptive global power” that disregards international rules and norms.

The country has already started restricting Chinese investment in its critical minerals sector, ordering three Chinese firms to divest from a trio of junior lithium explorers in early November.

Foreign Minister Melanie Joly released her Indo-Pacific strategy on Nov. 27, including nearly $1.7 billion (C$2.3 billion) in spending. The money is being used for more navy patrols in the region, better intelligence and cybersecurity measures, and increased cooperation with regional partners in the East and South China Seas.