The tariffs that U.S. President Donald Trump may impose on vehicles imported to the U.S. would be just the latest kick in the teeth for carmakers battling cooling markets across the planet.

Findings of an investigation into whether imported cars could pose a national security threat were received by Trump on Sunday. That was hours before China reported yet another monthly slump in car sales. The world’s largest auto market joins other regions including Europe and the U.S. starting the year on a weak note, fuelling anxiety over an industry already grappling with falling profits amid record spending to finance the shift to electric and self-driving cars.

The persisting gloom in China, the engine room for growth over the past decade, leaves automakers with few places to go. Japan is sputtering too, while volumes in other smaller markets aren’t enough to offset the declines in the biggest sales regions.

“Downward pressure is still there,” Gu Yatao, a Beijing-based auto analyst with Roland Berger, said of China. “The government isn’t adopting stimulating policies to give the market a shot in the arm.” 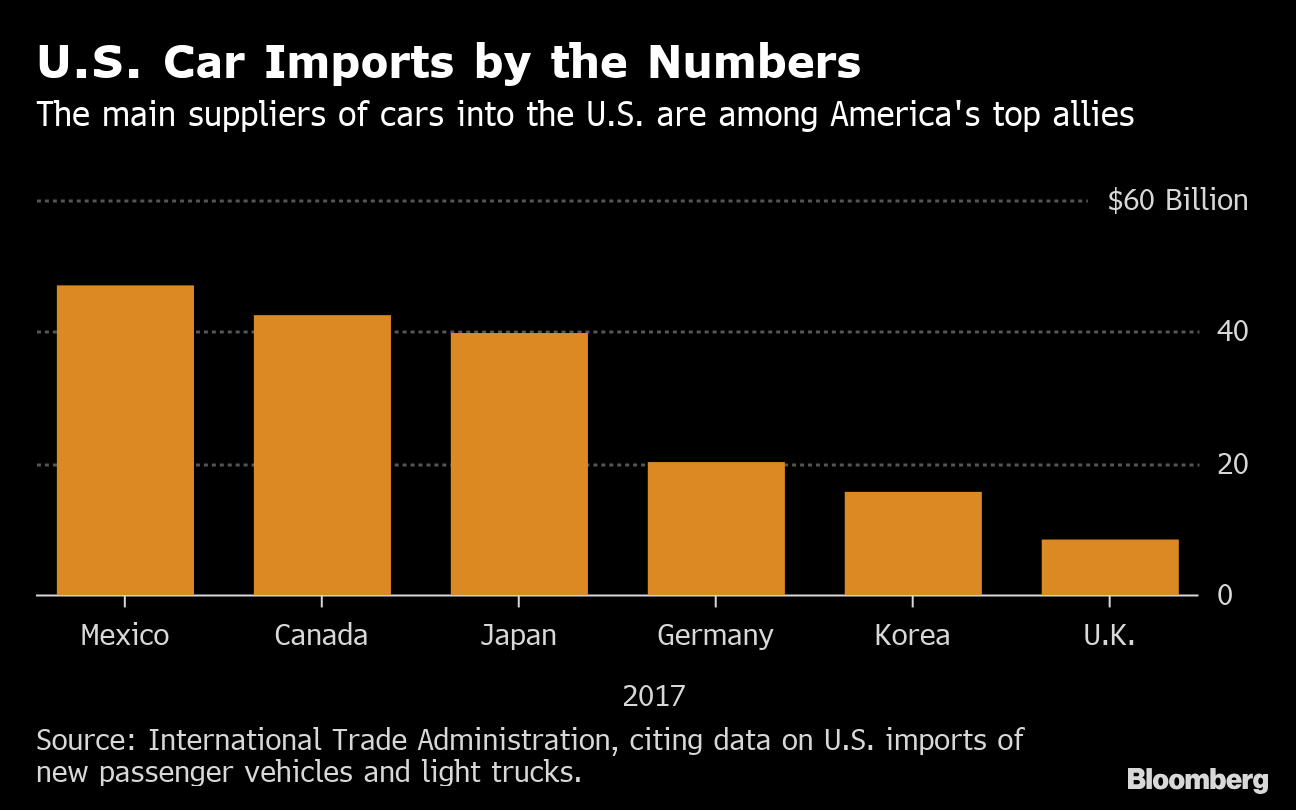 The global slowdown has hit earnings of almost everyone from Ford Motor Co. (FM.N) to Volkswagen AG (VWAPY.PK) and Toyota Motor Corp. (TM.N) to pile on the pressure as they spend on electrified and autonomous vehicles. In addition, trade woes, political upheaval and diesel’s demise are hurting consumer sentiment, while the increasing availability of ride-hailing and car-sharing services makes it less necessary to own a car.

Even with an expected recovery in China in the second half, the global car market will stall this year or grow just one per cent, said Janet Lewis, an analyst at Macquarie Group Ltd. (MQBKY.PK) in Tokyo. The U.S. and European markets will be little changed, she predicts.

“You can’t expect mature markets to grow significantly,” said Zhou Jincheng, an analyst at research firm Fourin Corp. in Nagoya, Japan. “The complexity of global trade environment is not helpful either.”

Sales to China’s dealers plummeted 17.7 per cent last month as the world’s second-largest economy slowed and negotiations with the U.S. for a trade-war truce dragged on. Consumers stayed away from showrooms even with discounting by dealerships ahead of the Chinese New Year Holiday. Last year, the market contracted for the first time since the early 1990s.

That’s leaving manufacturers who’ve spent billions of dollars adding plants and production lines in China in the past decades uncertain if and when growth will return. Geely Automobile Holdings Ltd. (GELYY.PK) targets sales of 1.51 million cars this year, an increase of just 0.7 per cent from 2018. Volkswagen, the No. 1 foreign manufacturer on the mainland, is expecting further growth for the company this year, but has predicted the overall Chinese market to shrink in the first half.

What’s happening in China is a reflection of the situation worldwide. In Europe, car sales declined for a fifth straight month in January. In the U.S., the top four premium car brands all posted sales declines last month to deepen a slump that began taking hold near the end of 2018.

Then there’s Trump, who has threatened a tariff of as much as 25 per cent on imported autos, risking a further hit to vehicle demand and carmakers’ bottom lines. The U.S. president has received the findings of a probe into whether imported vehicles pose a national security threat, the Commerce Department said Sunday.

The probe covers imports of vehicles including SUVs, vans and light trucks, as well as auto parts. American and foreign-based auto manufacturers have been lobbying against it, and Trump now has 90 days to decide whether to act on the findings.

With assistance from Matt Turner